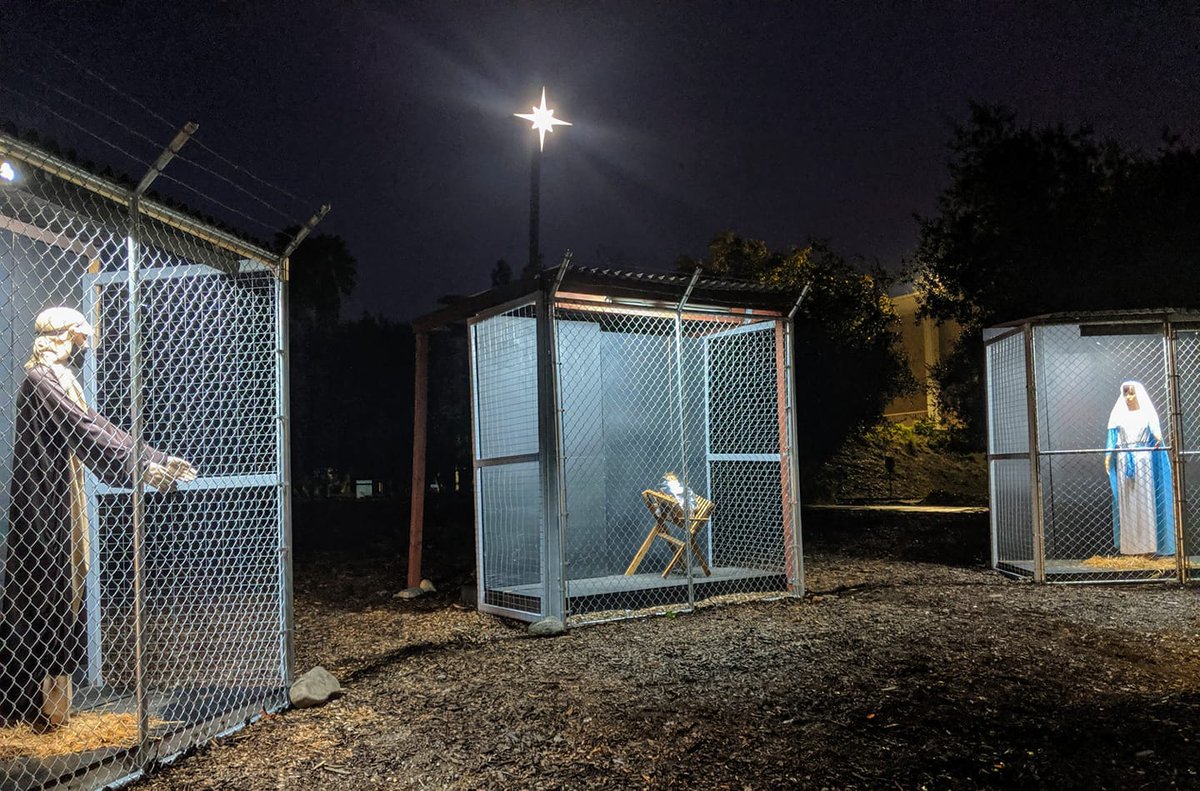 Jesus and his fam were refugees, so it’s only fitting that the folks at Claremont United Methodist Church decided to put its nativity figures in cages behind razorwire. As Rev Karen Clark...
by Raquel Jayson December 9, 2019 279 Views

Jesus and his fam were refugees, so it’s only fitting that the folks at Claremont United Methodist Church decided to put its nativity figures in cages behind razorwire.

As Rev Karen Clark Ristine said, Jesus, Mary and Joseph were “the most well-known refugee family in the world. What if this family sought refuge in our country today? Imagine Joseph and Mary separated at the border and Jesus no older than two taken from his mother and placed behind the fences of a Border Patrol detention center.”

A separate nativity inside the church reunites the family. Nearly 70,000 children were imprisoned by the US government for seeking asylum in 2019.

A Methodist church in Claremont unveiled a Nativity scene Saturday night depicting Jesus, Mary and Joseph as refugees in cages, likening one of the most well-known images of the Christmas season to photos that have become synonymous with criticism of the Trump administration’s border separation policies.

The display, which has stoked debate on the Facebook page of the church’s lead pastor, shows classic Nativity figurines of Joseph and Mary in cages on either side of a cage containing the manger of Jesus.

“We see this as, in some ways, the Holy Family standing in for the nameless families,” said the Rev. Karen Clark Ristine, the lead pastor at Claremont United Methodist Church. “We’ve heard of their plight; we’ve seen how these asylum seekers have been greeted and treated. We wanted the Holy Family to stand in for those nameless people because they also were refugees.”

While the Nativity scene shows Jesus shortly after birth and is the foundation of the Christmas holiday, the Claremont depiction appears to be invoking Joseph and Mary’s flight to Egypt. Under most interpretations, the infant Jesus and his parents had to escape Jerusalem for fear King Herod would have the baby slaughtered, perceiving the child as a threat to his reign.

Ristine, who has served as the church’s lead pastor only since July, said the church often uses its Nativity scene to tackle a societal issue. Southern California’s homelessness crisis has been invoked in past depictions, she said. A more traditional Nativity scene, showing the Holy Family reunited, can be found inside the church, which serves a congregation of about 300 people, Ristine said.

“We don’t see it as political; we see it as theological. I’m getting responses from people I don’t know … I am having people tell me that it moved them to tears,” she said. “So if the Holy Family and the imagery of the Holy Family and the imagery of a Nativity is something you hold dear, and you see them separated, then that’s going to spark compassion in many people.”

The Trump administration has faced broad criticism for its immigration policies, but the practice of separating children from their families while they were detained at the southern border drew especially strong bipartisan and international outrage before the president ordered an end to it in the summer of 2018.

She Was Planning Her Newborn’s Funeral When Her Water Broke At 13 Weeks: Christmas Miracle