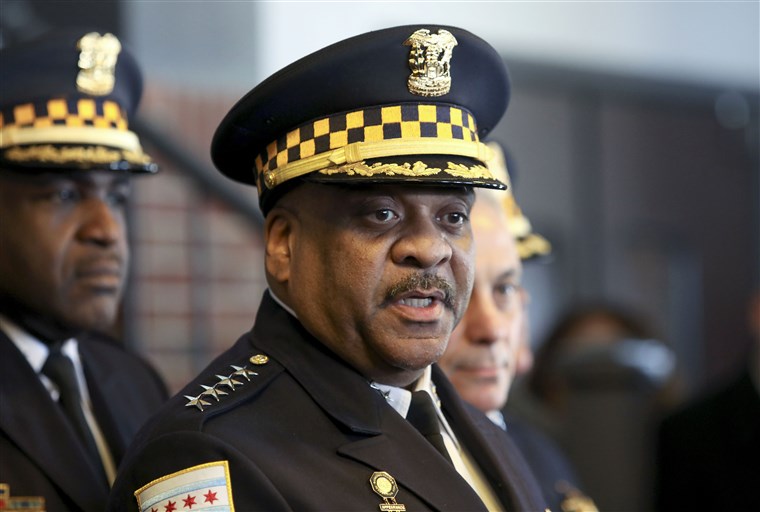 Chicago police Superintendent Eddie Johnson admitted that he had “a couple of drinks” Wednesday night before he fell asleep in his car: He Worked The Jussie Smollet Case!?…

Chicago police Superintendent Eddie Johnson admitted to Mayor Lori Lightfoot that he had “a couple of drinks” Wednesday night before he fell asleep in his car after pulling over...
by Zach Freeman October 19, 2019 212 Views

Chicago police Superintendent Eddie Johnson admitted to Mayor Lori Lightfoot that he had “a couple of drinks” Wednesday night before he fell asleep in his car after pulling over when he felt ill, the mayor told the Chicago Sun-Times on Friday.

The new detail came a day after Johnson went public about the incident and called for an investigation on himself by the department’s Bureau of Internal Affairs.AdvertisementPauseUnmuteLoaded: 0%Progress: 0%Remaining Time-0:24Fullscreen

In remarks to reporters Thursday night, Johnson blamed the incident on his failure to take his blood pressure medication.

Officers responding to a 911 call found him asleep in his parked car near his home in the Bridgeport neighborhood at about 12:30 a.m. Thursday.

Winter is quickly approaching, making it the perfect time to update your wardrobe with pieces that are easy to take from a training session to the streets.SEE MORE

Johnson’s chief spokesman, Anthony Guglielmi, had issued a statement Thursday saying the officers did not notice “any signs of impairment” on the superintendent’s part and let him drive to his nearby home. When asked Friday whether Johnson had been drinking, Guglielmi said he didn’t know and would not ask Johnson, citing the Internal Affairs probe.

“My asking that question would contaminate any planned interview,” he said.

Johnson told reporters he had been tired after a long day at work Wednesday but went out to dinner with friends that night. He said he felt ill early Thursday as he drove home from the dinner.

“How can I explain it? It’s just your body kind of gives you a warning with the high blood pressure thing that you may pass out, so I pulled over, stopped and I just rested myself until that feeling passed,” he said before the monthly Chicago Police Board meeting.

He defended the officers’ decision not to test for whether he had been drinking, saying, “Someone asleep in a car doesn’t mean they’re impaired.”

Johnson has not explained why he was driving home from a dinner engagement at 12:30 a.m., particularly on a day he said he felt fatigued.

After suffering a blood clot this past summer, Johnson said his cardiologist “adjusted” his medication during a follow-up appointment on Tuesday. The superintendent said he removed the old medication from his weekly pillbox but had not yet obtained the new prescription, suggesting he hadn’t taken his blood pressure medication for a couple of days.

Johnson said he returned to the cardiologist Thursday and learned his blood pressure was elevated.

Johnson said he ordered the Internal Affairs investigation of his own conduct “to avoid the appearance of impropriety and to just have total transparency.”

“As I’ve said before, every officer, regardless of ranks, must uphold themselves to the highest standards, and that includes me,” he said.

Guglielmi said the department has no plans to make public any video footage of the incident because of the ongoing internal investigation.

“Putting any video out before police interviews are completed could influence or tamper statements that are made to investigators,” he said.

After the now-infamous video of the fatal police shooting of Laquan McDonald wasn’t made public for more than a year, the city instituted a policy of releasing any such footage within 60 days of police-involved shootings. At that point, the investigations into those shootings are many months from being completed.

In an apparent reference to the 60-day policy, Lightfoot told reporters Friday that video from Johnson’s incident “will be released at some point. That’s the policy.”

“I think we’ve got to let Internal Affairs do its work, and then we’ll see where things lead,” she said.

Donnie McClurkin: ‘I’m at a time now I sing when I want to’