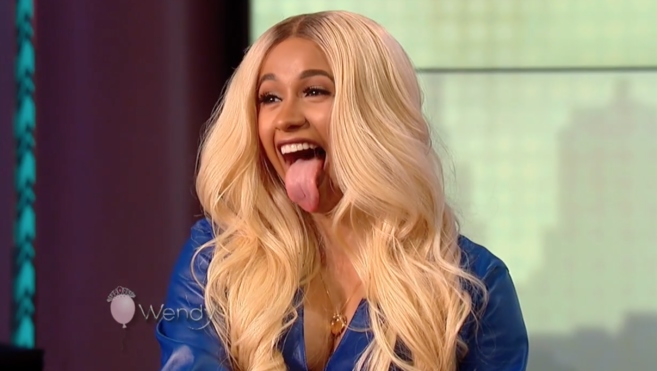 Wendy Williams Slams Cardi B For ‘Not Acting Like A Woman’ In Alleged Strip Club Fight MediaPunch/REX/Shutterstock/Evan Agostini/Invision/AP/Shutterstock  Wendy Williams thinks it wasn’t lady like for Cardi B to even be associated...
by Raquel Jayson October 3, 2018 3007 Views

Wendy Williams thinks it wasn’t lady like for Cardi B to even be associated with an alleged fight at a strip club, which she’s since been charged in! And, Wendy thinks it’s Cardi’s entourage who are culprits for her ‘anger issues.’

The tea was extra hot on The Wendy Williams Show on October 2! The outspoken talk show host, 54, reacted to Cardi B, 25, surrendering to police in Queens, New York, after she alleged ordered an attack on two bartenders/entertainers at Angels strip club back in August. “I feel like she’s so far up the totem pole. This is just not how a woman is supposed to act,” Wendy told her studio audience on Tuesday.

She continued: “In my mind, what adds to it is that she chose to live, what they call, ‘the dream of life,’ … getting married and having a kid, and she’s out here doing all of this.” Wendy went on to repeatedly tell the “Bodak Yellow” rapper to “work on your anger,” claiming that it’s Cardi’s entourage who could have something to do with her behavior. “The people around you, don’t let them encourage you to be angry like that. You have to work on your anger because you’re a target with millions.

“You seem like the type of person, it’s real easy to get you upset and so you’re a walking target for lawsuits. Don’t let the people around you influence you… Forget Offset, this is about you and your daughter,” Wendy added. As you may know, Cardi and Offset secretly married in September 2017.

Wendy later suggested that Cardi should “just pay these girls off and make it go away.” She also added that she believes the alleged victims in the club attack will “definitely get some money out of this.”

As previously reported, the rapper surrendered to police on Monday morning, October 1, and was subsequently arrested and charged with two counts of reckless endangerment in the second degree and one count of assault in the third degree. She is scheduled to be arraigned on October 29. “Cardi B received a desk appearance for reckless assault, misdemeanor offensive, and she’s released to the 109 Precinct,” the NYPD shared in a statement. “She was given a desk appearance ticket and she’s going to appear at a later date and the charges were for assault and reckless endangerment. She’s been released and wasn’t put through the system.”

The alleged attack occured because Cardi reportedly thought one of the two females was involved with Offset. In the midst of her court appearance, she posted a cryptic messaged on her Instagram story of three rat emojis.

Soon after she was processed, HollywoodLife.com learned that Cardi could face up to one year in jail, as well as possibly facing a payment of millions.