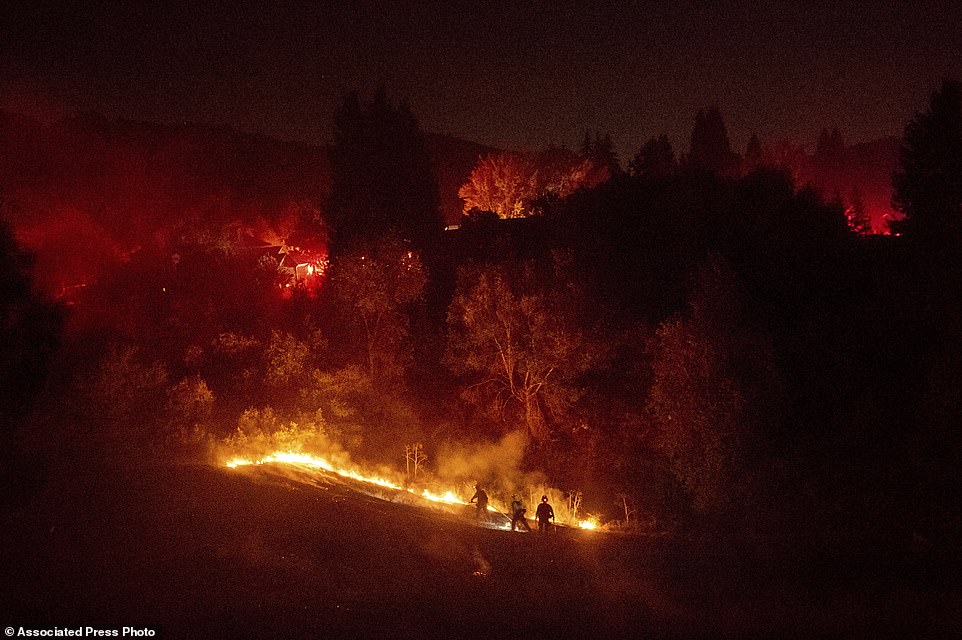 Police order evacuations as fast-moving wildfire spreads near San Francisco Cal Fire said flames consumed about 60 acres in little more than two hours in the hills of a...
by Raquel Jayson October 10, 2019 206 Views

Cal Fire said flames consumed about 60 acres in little more than two hours in the hills of a Bay Area community, Sanders Ranch

Police ordered evacuations early on Thursday as a fast-moving wildfire spread in the hills of a San Francisco Bay Area community.

The flames surged despite the area being part of a large parcel of northern California where more than 1.5 million people have had their power deliberately cut off to try to prevent the kind of blazes that have devastated parts of the state in recent years.

The wildfire broke out amid dry weather and strong winds sweeping through the region.

Firefighters in the Moraga-Orinda area responded to the scene near the St Mary’s College campus. The school did not immediately appear threatened but 100 homes were initially evacuated, before the order was lifted for about 50 of the homes some hours later.Advertisement

The California department of forestry and fire protection (Cal Fire) said the flames had consumed about 60 acres in little more than two hours.

The community is in Contra Costa county, part of ongoing pre-emptive electricity shutdowns by Pacific Gas and Electric, the US’s largest utility company.

Before the fire even broke out, much of northern California was facing life without electricity or gas for as many as five to seven days, after the utility cut power to an unprecedented swath of the state as a preventive measure against wildfires.

More than 1.5 million people were in the dark early on Thursday, most for a second day and the power shutoffs by PG&E may affect up to 2.5 million people by the end of the week. The first wave of shutoffs began on Wednesday to portions of 20 of the state’s 58 counties.

Santa Clara county, the home of Silicon Valley, declared a local emergency on Wednesday afternoon in hopes of spurring California to declare a state of emergency.

Swaths of wine country north of San Francisco, hit hard by wildfires in 2017, was without power for most of Wednesday, along with the region north of Sacramento devastated by the 2018 Camp fire.

And it stretches along the coast into the far north of the state.

The University of California, Berkeley, canceled classes on Thursday for the second day because it had no electricity.

PG&E has a 70,000 square-mile service area, and serves more than a third of the state. The utility declared bankruptcy in January, in part because of potential liabilities from its role in some of the 2017 fires and the Camp fire.

PG&E began practicing preventive shutoffs this year during red flag fire weather conditions – high winds and low humidity – after investigators found it at fault in two of the deadliest wildfires in California’s history, both within the past two years.

Some of the wildfires started because of trees falling on power lines – trees that should have been cleared by PG&E because of their proximity to the lines. In the 2018 Camp fire, which killed 85, the utility’s outdated infrastructure was implicated.

Amid warm temperatures and strong winds, major shutoffs are expected to become a staple in a state gripped by the climate crisis.

Tekashi69 Get Record Deal Worth Millions While Still in Prison