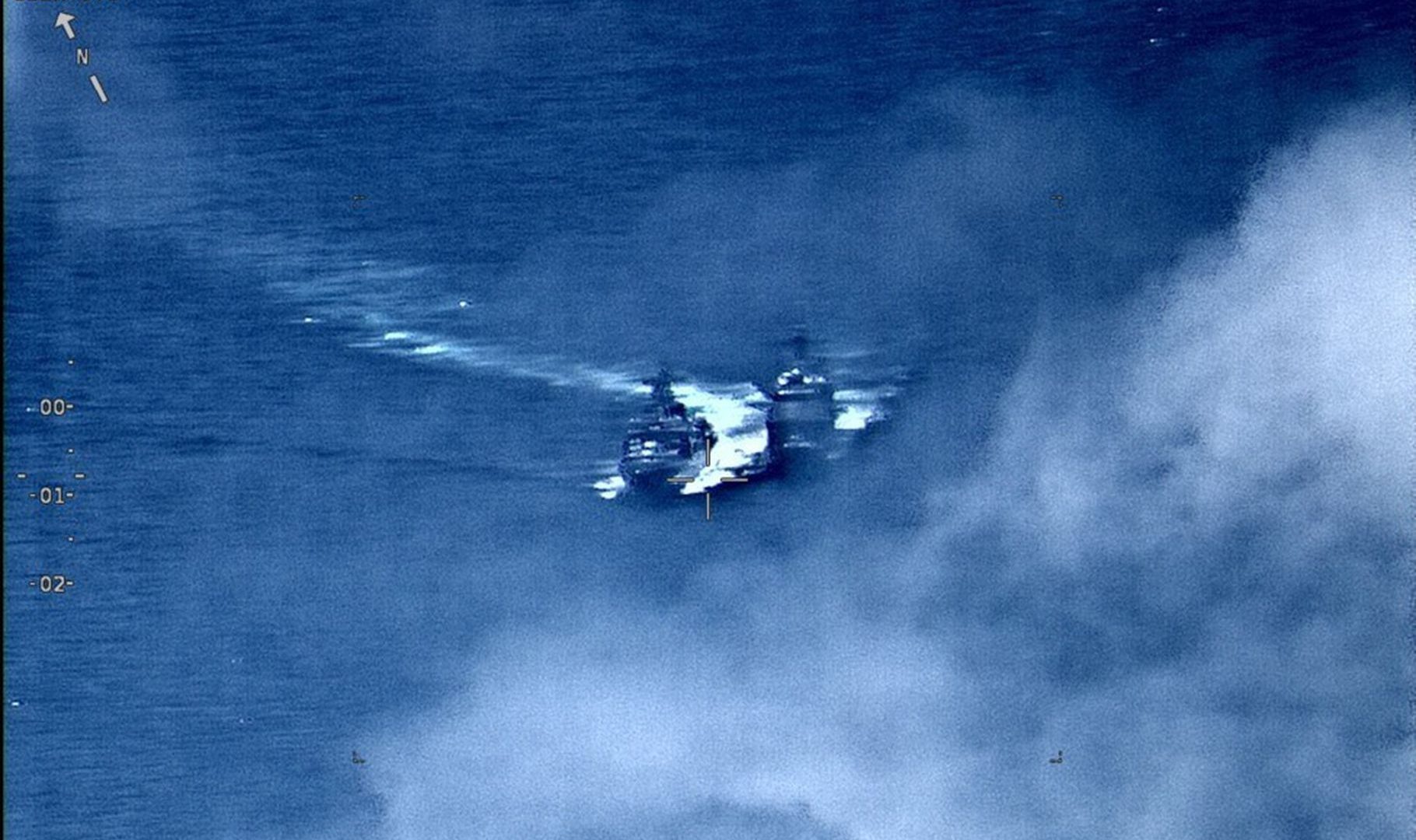 US Navy image of the incident between the US and Russian warships on June 7, 2019. Mass Communication Specialist 1st Class Petty Officer Chris Krucke/US Navy A US warship and...
by Raquel Jayson June 7, 2019 410 Views

A US warship and a Russian destroyer nearly collided in the Pacific Ocean — and both sides are blaming the other for what could’ve been a deadly catastrophe.

The US Navy says a Russian destroyer came within 50 to 100 feet of USS Chancellorsville, an American cruiser, around 11:45 am local time in the Philippine Sea. “This unsafe action forced Chancellorsville to execute all engines back full and to maneuver to avoid collision,” Navy spokesperson Cmdr. Clayton Doss said in a statement.

Moscow tells a different story. A spokesperson for Russia’s Pacific Fleet told TASS says that the American ship “suddenly changed direction” and came within 160 feet of the Russian vessel, named the Admiral Vinogradov, forcing the Russian crew to quickly move out of the way.

What’s more, Russia says the event happened in the East China Sea, adjacent to — but different than — the Philippine Sea.

So not only do the US and Russia provide conflicting accounts about who is responsible, they can’t even agree on where it actually happened.

Luckily, the US Navy has video of the incident, released Friday in two parts. There’s no audio, but you can still see how incredibly close the two ships came to one another:

The videos are remarkable. With the caveat that the US Navy probably wouldn’t willingly release images that would make it look bad, it does seem like the Russian ship takes a pretty direct course to get close to the American vessel. Once it gets near, though, it turns sharply away.

The Navy also released a still aerial image of the incident, showing the two ships close to one another but with the Russian vessel quickly banking to the right. Two unnamed US officials told CNN on Friday that the wake seen in the picture would only be possible if the Russian ship made a hard turn at a high speed.

Based on the provided videos and image, it seems like Russia may have aimed to have a close call with the US Navy. The question, then, is why?

The answer, surprisingly, may be China.

Russia and China are becoming friends. That should worry the US.

There is no reason for those ships to have come as close as they did. There are protocols in place to avoid that kind of incident. However, Russia has come close to American ships and planes in the past, which sadly doesn’t make Friday’s episode all that novel.

On Thursday, for example, a Russian fighter jet harassed a Navy patrol plane on multiple occasions, an incident that lasted around 175 minutes in the Mediterranean Sea.

What is new, though, is that the encounter occurred in Pacific waters so far away from the Russian mainland. Most US-Russia close calls happen in the Mediterranean, the Atlantic Ocean, or near the Arctic, experts say.

But there may be a simple reason for this episode: Russian President Vladimir Putin could be trying to signal to Chinese President Xi Jinping that he can be counted on as a friend.

“Clearly this sends a strong message to President Xi, from Putin’s perspective, that we are on your team,” retired Rear Adm. John Kirby told CNN on Friday. “We have seen the Russians and Chinese cooperate increasingly … when it suits their interests,” he continued.

That makes sense. Putin and Xi just held a summit on Wednesday in which the Chinese leader called his Russian counterpart his “best and bosom friend.” What’s more, both countries held a massive military exercise just last year, signaling their desire to work more closely on defense.

Nearly ramming a US vessel in the Pacific, where China operates frequently, could be another sign of increasing Sino-Russia ties — after all, Beijing has a stated interest in wanting to have near complete control of waters in its region. And if that’s the case, the US has a powerful duo to compete against, one of which aims to reduce US power in Asia.

“Putin clearly has ordered the Russian Navy to pressure the US Navy whenever opportunities exist,” retired Navy Capt. Carl Schuster, who had extensive experience working in Asia, also told CNN. “It may possibly be a show of political support for China while Xi is in Moscow, but more likely to signal that Russia is willing to challenge the US dominance on the world stage and at sea.”

Father faces death penalty or life without parole after killing all five of his children!

Woman responds to Tyler Perry’s comment on her buying a billboard to get his attention!