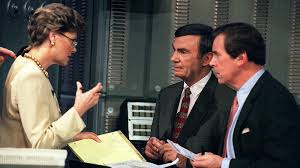 Renowned ABC News journalist Cokie Roberts, among the first female broadcast reporters to cover the highest levels of U.S. government, died Tuesday due to complications from breast cancer, her family and the network said. She was 75.

“We will miss Cokie beyond measure, both for her contributions and for her love and kindness,” her family said in a statement.

“Cokie’s kindness, generosity, sharp intellect and thoughtful take on the big issues of the day made ABC a better place and all of us better journalists,” Goldston said.

Former President Barack Obama and wife Michelle Obama hailed Roberts for rising to leadership roles in journalism at a time when the field was “dominated by men,” and “informing voters about the issues of our time.”

“Michelle and I are sad to hear about the passing of Cokie Roberts,” the 44th president said in a statement. “She was a trailblazing figure; a role model to young women at a time when the profession was still dominated by men; a constant over forty years of a shifting media landscape and changing world, informing voters about the issues of our time and mentoring young journalists every step of the way.

The former first couple added: “She will be missed — and we send our condolences to her family.”

“We respected her drive and appreciated her humor,” the 43rd president said. “She became a friend.”

In addition to her ABC News career, she was among the first female reporters at National Public Radio, working alongside other renowned journalists like Nina Totenberg, Linda Wertheimer and Susan Stamberg — often called “the Founding Mothers of NPR,” the outlet said.

Goldston at ABC News said Roberts won all of the major awards in journalism and was relentless in pursuing unnoticed episodes in American history.

“A terrifically talented writer and historian, Cokie published six books, many of them best-sellers and most about women in American history, whose stories often had been overlooked,” the network’s news president said.

“Cokie was named one of the 50 greatest women in the history of broadcasting by the American Women in Radio and Television, and the Library of Congress declared her a ‘Living Legend’ in 2008, making her one of the very few Americans ever honored,” Goldston said.

Even with her busy career in front of the camera, Roberts found time to be a prolific author, writing several books on the role of women in U.S. history.

“Cokie Roberts was a trailblazer who forever transformed the role of women in the newsroom and in our history books,” House Speaker Nancy Pelosi said. “Over five decades of celebrated journalism, Cokie shone a powerful light on the unsung women who built our nation, but whose stories had long gone untold.”

Her colleague Jonathan Karl, chief White House correspondent for ABC News, called Roberts a “mentor, friend and one of my favorite people in the world.”

“Cokie attended 22 national political conventions — that may be a record — I had the privilege of interviewing her on the floor of her last convention,” Karl tweeted.

Karl’s statement was re-tweeted by Andrea Mitchell, NBC News’ chief foreign affairs correspondent and host of MSNBC’s “Andrea Mitchell Reports,” with the added message of: “We are so sorry for the loss of your friend and colleague a beloved person and role model to generations of journalists.”

Former “Today” host Katie Couric echoed those sentiments, saying of Roberts: “She was a pioneer for so many and will be sorely missed.”

She came from a political family and throughout her childhood and young adult life, Roberts rubbed elbows with some of Washington’s most prominent figures.

Her father was Rep. Hale Boggs, D-Louisiana, who was elected to Congress in 1940 and went on to become House majority leader.

He died in a plane crash in Alaska just before the 1972 election but was nevertheless re-elected.

Cokie Roberts’ mother, Lindy Boggs, won a special election for her late husband’s seat in 1973 and served in the House through 1990. Lindy Boggs later served as U.S. ambassador to the Vatican, under President Bill Clinton.

Among those close to Roberts’ family were President Lyndon B. Johnson, who attended her wedding to the columnist Steven Roberts, and former Speaker of the House Sam Rayburn, a frequent dinner guest at the Boggs’s home in New Orleans.

Roberts earned her bachelor of arts in political science from Wellesley College in 1964.

In addition to her husband, she is survived by a daughter, journalist Rebecca Roberts; a son, Lee; and several grandchildren.