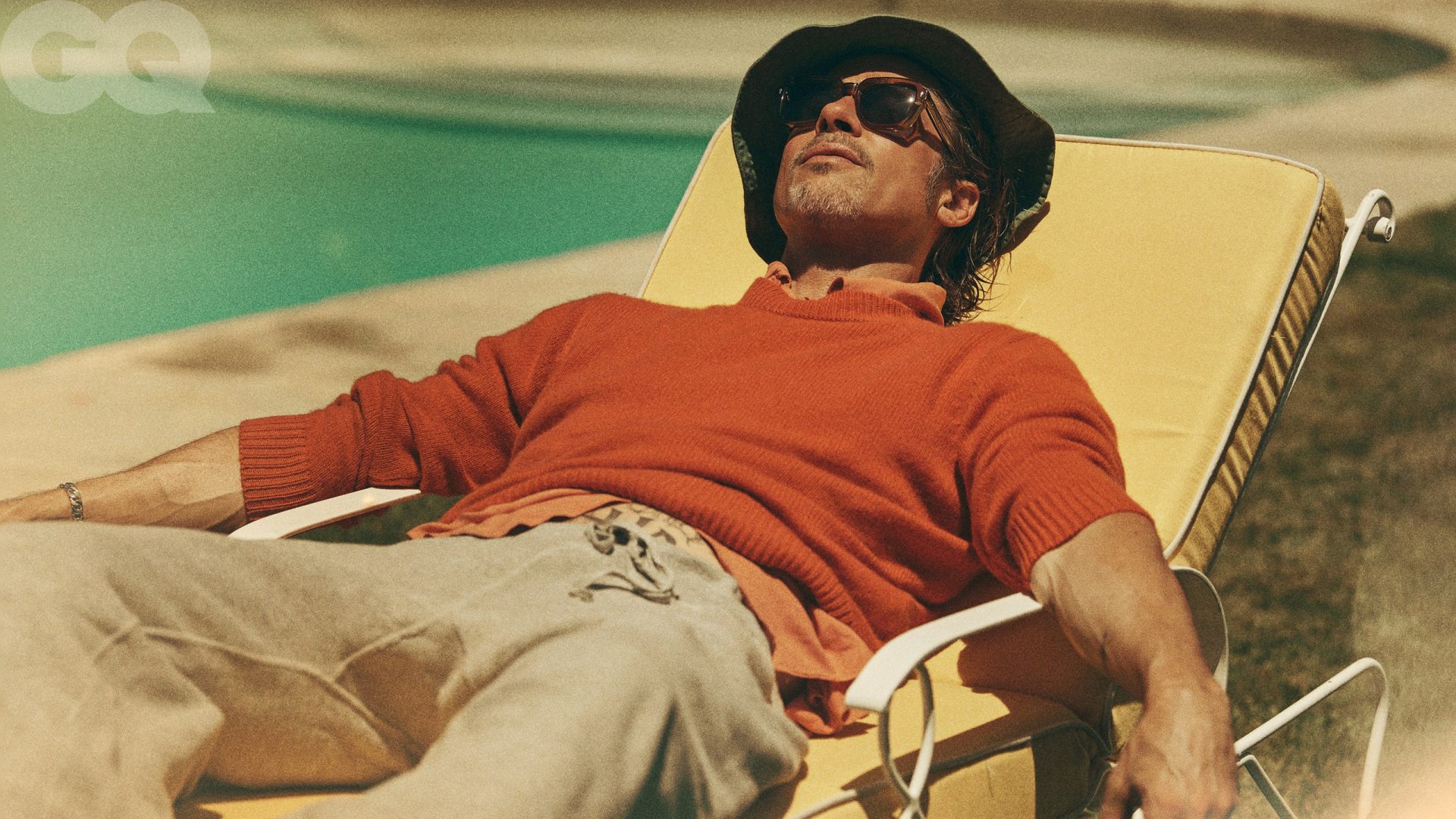 At 55, the consummate Hollywood star seems to have the Hollywood parts figured out, using his wattage to get unlikely movies—like his new space drama, Ad Astra—into theaters. But inside,...
by Alycia Pascual-Pena September 17, 2019 462 Views

At 55, the consummate Hollywood star seems to have the Hollywood parts figured out, using his wattage to get unlikely movies—like his new space drama, Ad Astra—into theaters. But inside, there’s a whole lot he’s still working out.

Brad Pitt doesn’t give interviews often, and when he does, they tend to happen in strange and impromptu places. Like this poolhouse, on a property that belongs to neither of us, not too far outside Pasadena. By necessity and inclination, Pitt likes to present a moving target, and so he spends a lot of time passing through spaces like this one, spaces that are convenient to something else he’s doing and that once he leaves, he’ll likely never see again. He’s Brad Pitt, though: With him comes an atmosphere, his own weather, a heightened kind of reality that involves everyone in the vicinity looking directly at him until he’s gone. Despite that—or, maybe at this point, because of it—he’s learned to be comfortable, at ease, just about anywhere. Anyway, picture a room we’re both strangers to. That’s where Brad Pitt and I talk.

Just yesterday the Quentin Tarantino film Once Upon a Time…in Hollywood, which Pitt stars in opposite Leonardo DiCaprio, opened in New York and Los Angeles. Pitt was also watching the final cuts of a film called Ad Astra, directed by James Gray, that was due in theaters in September. All of a sudden, people were remembering the existence of Brad Pitt—the great movie star, maybe our greatest, in not one but two movies, reminding everyone just how good he is at this when he bothers to do it. Because he doesn’t actually act much anymore. He hasn’t made a big deal about this—just gradually receded into his own life and pursuits, which in the past few years have been turbulent and included a spectacularly public divorce. In Hollywood he’s increasingly become more of a producer and power broker, through his company Plan B Entertainment, than an onscreen presence.

When Pitt does act now, it’s often to help will a film into existence—appearing just often enough in The Big Short, or 12 Years a Slave, so that he can be cut into the trailer and waved in front of the movie’s financiers. But prior to this year, the last movie he actually starred in was the 2017 Netflix feature War Machine. Before that, 2016’s Allied. His last truly great lead performance, arguably, was in 2011’s Moneyball, a clinic in easy, weary ex-jock charisma that led to Pitt’s third and most recent Academy Award nomination as an actor.

So he was getting used to being out and in public—or, at least, semipublic—again. He tried to explain what it was like for him to try to move around outside of his home in Los Angeles. Whole cities sometimes feel practically off-limits to him, he said. New York, for example: “It’s always been tough for me. Just the paparazzi. I can’t have freedom there. So without that—it takes the fun out of it.” His experience of daily life is in many ways so different from most people’s that he’s learned to strip conversations back down to their most basic and sturdy parts: How old are you? What do you do?

He’s 55 and an astronaut: gone places and seen things that most of us never will. And now, for the first time, he’s playing one in a movie. In Ad Astra, Pitt’s character is named Roy McBride. In the opening scenes of the film, he’s given a mission to travel from Earth into increasingly distant space in an attempt to find his beloved astronaut father (played by Tommy Lee Jones), who disappeared years ago and who may or may not be still alive.

Pitt made the movie with an old friend of his, the director James Gray, and both men will tell you that—though Ad Astra takes the form of an action film, complete with moon-set buggy chases and space-capsule shoot-outs—it’s really about the ideas and thoughts and fears that seize you as you roll into late middle age. Are we alone in this world? Can we ever be truly understood—or, for that matter, ever understand ourselves? “Almost all of it is trying to figure out a way to express our emotional interior,” Gray told me. “And almost none of it: ‘I gotta get the gun.’ It’s about trying to find a way to express something about loneliness. To get at something that we both understood and sometimes couldn’t even verbalize.”

In the film, Pitt’s McBride is isolated and almost pathologically repressed. McBride is also a celebrity—son of a famed explorer, recognized by everyone he meets. The parallels with Pitt himself were not lost on either man. “One of the things that I found always very beautiful,” Gray said, “is this idea that you could make a film about someone that outwardly you think has it all together but in fact is really battling inner demons. And I felt that Brad had always had that kind of—I don’t want to say anger, because anger has negative connotations—but danger in him, you know? And that kind of loneliness, which comes with the territory of who he is. And you use that.”

In the poolhouse, I asked Pitt if he found it difficult to play a character as alone as McBride is in Ad Astra.

“Leo and I were having this conversation the other day. I hit this point in the late ’90s or early 2000s, where I realized I was chasing these interesting [roles], yet I was failing to live as interesting a life as I thought I could.”

He’d already tried to lie down on the bed in the poolhouse, he told me, only to encounter an unsettlingly musty smell. “You know those roadside motels, in the desert?” he said, gesturing at the bedspread. So he’d relocated to a wooden chair, and then he started leaning back in the chair, and then the chair started squeaking and almost gave way.

“I’m going down,” Pitt said, trying to regain his balance. I offered to switch.

Here he smiled the wolfish, rueful grin that he has been smiling in movies for more than 30 years now.

“Yes, you go down,” he said. Then laughed the wolfish, rueful laugh that he has been laughing in movies for more than 30 years now.

Perhaps because of how infrequently Pitt stars in a movie these days, it’s tempting to try to figure out what in Once Upon a Time… or Ad Astra drew him off the sidelines and back to acting. Pitt will acknowledge that these choices have become increasingly personal as his career has gone on. “It’s been my question the last 15 years: ‘If I’m gonna do the role, what can I bring to it that someone else can’t?’ ”

How do you find the answer?

“Well, it’s about bringing my personal experience, my personal humor, my personal, um, embarrassments, and my personal pains. When I watch [Christian] Bale or [Tom] Hardy, I can’t do what they do. I love watching them. And I couldn’t step into that role.” But: “I want to do the same thing on my end.”

Mostly, he said, he just says no to stuff. “Leo and I were having this conversation the other day. I hit this point in the late ’90s or early 2000s, where I realized I was chasing these interesting [roles], yet I was failing to live as interesting a life as I thought I could.”

He didn’t say exactly when, or what movie, marked this transition, but you can ballpark it. It’s when he goes from the Pitt who was a ’90s cinema icon—chiseled, heartthrob-y, gravely standing at the center of whatever movie he was in—to the Pitt we know now, the one who is completely without hang-ups about being looked at, who is confident enough in his absurd beauty and charisma to do weird and character-actor-ish things with it. Watching Oprah with George Clooney and holding back tears (Ocean’s Thirteen). Making quiet, meta-textual statements about celebrity and manhood (The Assassination of Jesse James by the Coward Robert Ford). Wrapping himself in spandex (Burn After Reading). Scalping Nazis (Inglourious Basterds). Chewing, snacking, fidgeting, snacking some more (all of them).

Pittsburgh Pirates Felipe Vazquez ARRESTED FOR SOLICITATION OF A CHILD