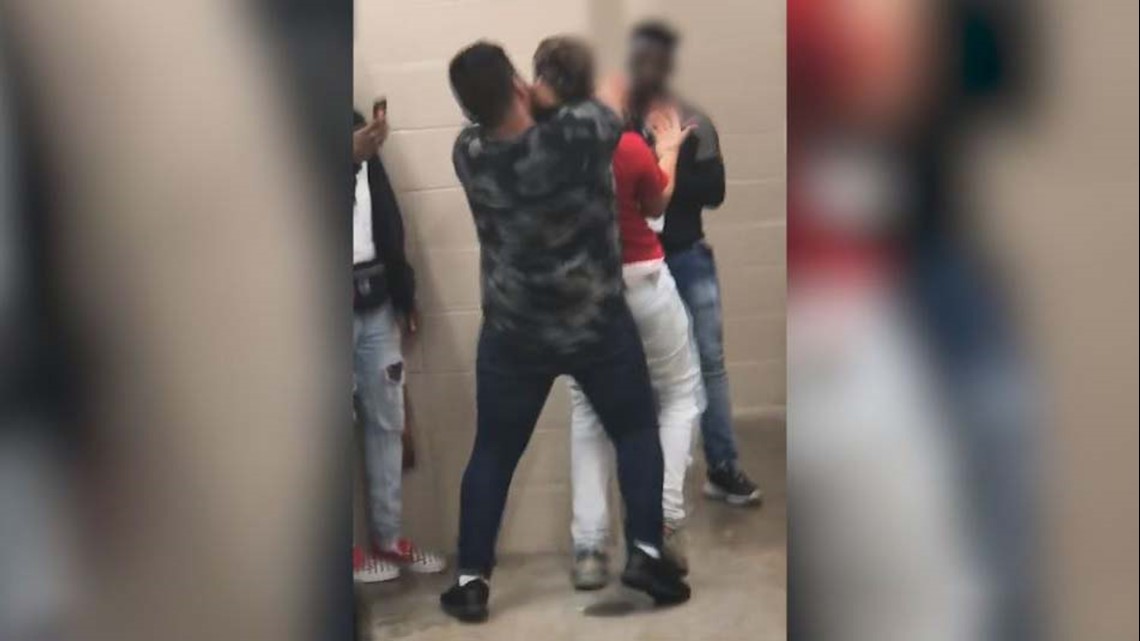 A fight inside New Caney ISD’s Texan Drive Stadium shows the dramatic moments when a freshman student was choked unconscious by a classmate. The boys are both students at...
by Raquel Jayson October 27, 2018 662 Views

A fight inside New Caney ISD’s Texan Drive Stadium shows the dramatic moments when a freshman student was choked unconscious by a classmate.

Ruby Rodriguez can barely watch the video that shows her son, Sabian Brown, losing consciousness.“I want something to be done about the student because next time it might be too late for somebody else,” Rodriguez said.

“I just saw his body go limp, and that’s all I saw and I stopped watching it there,” Rodriguez said. “He could have lost his life.”

The fight happened at Porter High School’s homecoming football game on Oct. 5. Brown says a confrontation with a classmate in the stands led them into the men’s room where they agreed to a “slap-boxing match.”

“It’s just slap-boxing,” Brown explained. “You are not supposed to choke anybody in slap boxing.”

Slap-boxing is a form of fighting where only the palm of the hand is allowed.

“He started trying to grab me and stuff, so that’s when I turned around and was like, ‘No. We are done.’ So, I started walking away, and then he put me in a chokehold.”

The videos show Brown was chocked unconscious then left on the floor.

Friends say Brown was out cold for several minutes. He eventually came up and was then taken to the emergency room by ambulance.

“Thirty seconds more he wouldn’t be here to talk about it,” Rodriguez said, “and I feel like I’m the only one that sees that from the school district.”

Rodriguez is furious that both her son and the other student were punished equally. Both were sentenced to 30 days at a disciplinary school called The Learning Center.

Rodriguez doesn’t only find the punishment unfair but is also worried to send her son to a disciplinary school and hasn’t made him go yet.

“A lot of the kids that are in there have issues, either for aggressive fighting or drug wise.”

Because Brown has missed nine school days at TLC, the district is threatening to un-enroll Brown from Porter High School unless he attends starting Monday.

Rodriguez is also frustrated that criminal charges haven’t been filed against the student who choked her son.

“The New Caney ISD Police investigated an incident arising from a disagreement that occurred between two students in a restroom at the stadium.

“The incident was referred to the Montgomery County Juvenile Prosecutor who determined it was a fight which is not prosecutable under current state law. How the county attorney’s office decides to proceed with a case can impact what disciplinary actions are taken by the school district. Students involved were disciplined according to the New Caney ISD student code of conduct.

“Student safety is the top priority for New Caney ISD. The district cannot comment further on student disciplinary issues due to federal law.”