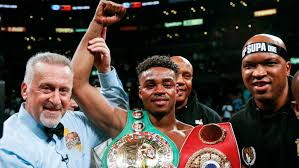 Boxing Champ Errol Spence Jr. Has Been Seriously Injured in a Ferrari Crash

Smith told ESPN Spence’s injuries sustained in the wreck were not life-threatening.

The driver whom police did not identify but called a “high-profile man” was not wearing a seat-belt and was ejected from the vehicle before being rushed to Methodist Hospital in Dallas. He is currently in intensive care, and a full update on his health is expected soon, police said.

Errol Spence Jr. (C) of the USA celebrates after winning against Shawn Porter of the USA during their WBC and IBF World Welterweight Championship fight at Staples Center in Los Angeles. (Photo: FRANCK BACHINI, EPA-EFE)

“Errol was in an accident, and his parents are with him at the hospital,” Smith told ESPN. “The doctors are monitoring his condition, but his injuries are not life-threatening. We will have further updates as the doctors update his condition. We’re all wishing the best for Errol.”

The 29-year old Spence is 26-0 in his career, having recently defeated Shawn Porter on Sept. 28. He’s held the IBF title since May, 2017 and WBC title since this September. The DeSoto, Texas, native, has represented the U.S. at the 2012 London Olympics and several U.S. national championships.

Chris Brown’s Daughter, Royalty Brown Can Break it Down! WATCH

Over 200,000 students expected to ‘stand for Christ’ on football fields across the nation