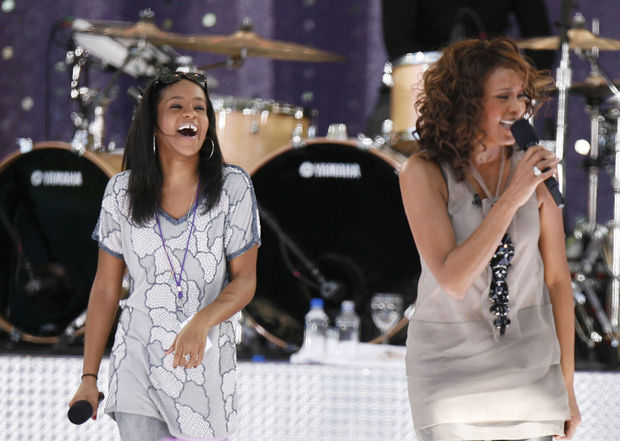 A youtube documentary has been released by a vlogger “CheckersNotChessTv” to chronicle the timeline of Whitney and Bobbi Kristina’s death.

In the docu it shows how Leola Brown has been vocal before Whitney’ Death and afterwards. Many thought back in the day that Leola was the one to release photos of Whitney’s bathroom showing drug paraphernalia , yet in this video it’s saying it was Bobby’s other sister Tiffany.

There is a clip in this video that shows Leola Brown coming out of Krissi’s funeral after she was allegedly put out for an outburst while Pat Houston was speaking.

Leola shares an interesting claim stating she knew something was strange when she heard Whitney was found in a bathtub. She states Whitney did not use hotel bathtubs. We have heard many celebs that say the same. Tamar Braxton has often shared she does not take baths and neither does Wendy Williams. They both stated they don’t like sitting in their dirt. Leola says she has questions as to why Whitney was in a bathtub, where was her security Ray and why was Ray J hiding his face when leaving the hotel the night of her death.

She has many valid questions and the main question is will the world ever know what happened to Whitney Houston or Bobbi Kristina. Leola shares that Bobbi Kristina had bruises on her, had not eaten when she was admitted into the hospital and two of her teeth were knocked out. Now, Nick Gordon is deceased from a drug overdose so will justice ever been done for these two women, if it was foul play as Leola Brown believes.

It will be a mystery of this lifetime, but I hope they both rest in peace. Such a tragic story of an American icon.