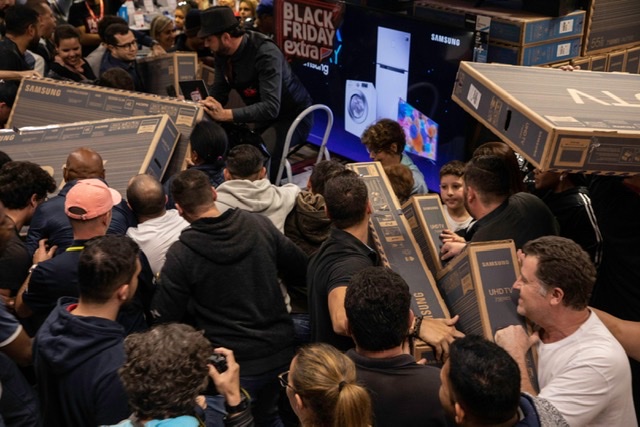 THE Black Friday sales have seen chaos break out around the world, with fights, stampedes and a gun scare at shops in the US, Brazil, and South Africa. Security...
by Raquel Jayson November 29, 2019 218 Views

THE Black Friday sales have seen chaos break out around the world, with fights, stampedes and a gun scare at shops in the US, Brazil, and South Africa.

Security guards were filmed fighting to stem the flow of people as shoppers jostled to grab the best deals.

In Pennsylvania, bystanders were pictured scattering as a fight broke out in front of a branch of clothing store Forever 21.

The scuffle initially appears to involve two young men, but as they fall to the ground others become involved.

Some join the melee, pushing and punching the two men, while others appear to be trying to break the fight up.

A man can be heard angrily shouted as another behind the camera says: “Yo, Kemi, Kemi, baby, what’s going on?”

A security guard also appears to be trying to stop others from becoming involved.

In the background is a window sign reading: “BLACK FRIDAY. 30% OFF”.

In Fremount, California, there were reports of a gun scare after someone shouted the word “shooter” in a branch of retail giant Target.

One person tweeted they had had to “sprint out with my mom out the emergency exit” while another warned others to “stay clear of the area” after the incident, which proved to be a false alarm.

Black Friday is an informal name given to a day of highly-promoted sales that began in the US but that now marks the start of the Christmas shopping season in dozens of other countries.

It falls the day after the US holiday of Thanksgiving in late November, though recent years have seen many outlets slashing their prices on Thanksgiving itself.

As well as lowered prices, the day has become associated with instances of violence and unrest as shoppers jostle to grab the best deals.

CHAOS AROUND THE WORLD

Similarly chaotic scenes were witnessed in countries around the world.

In South Africa, a crowd of shoppers was seen charging into a shopping centre as guards removed security barriers.

Some were seen at risk of being trampled after falling over in the rush.

Footage from another store showed guards struggling to stop the flow of people after lifting a tape to let a limited number in.

In Sau Paulo, Brazil, crowds were seen gathered around a man with a microphone stood on top of pallets of cut-price flat screen televisions.

Confetti is seen being released as the man unveils the televisions and the shoppers surge forward.

People are seen falling onto one another, and onto the screens, in the scramble to secure one for themselves.

In Uganda, a women was filmed being stretchered out of a store after passing out in the middle of a crowd.

KID ROCK GOES ON DRUNKEN RANT ABOUT OPRAH … And I Ain’t Racist!!!