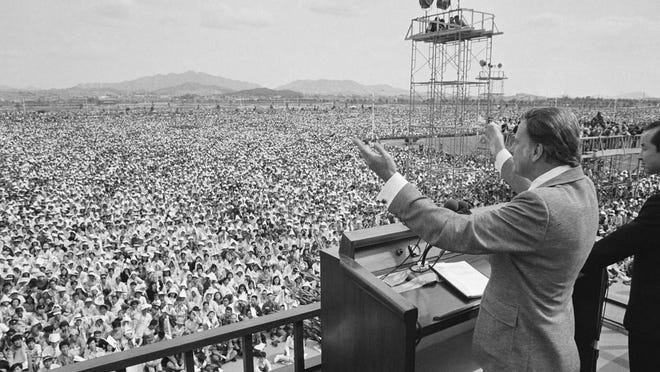 As a proud granddaughter of the man largely credited for beginning the evangelical movement, the late Billy Graham, the past few years have led me to reflect on how much has changed...
by Zach Freeman August 27, 2020 255 Views

As a proud granddaughter of the man largely credited for beginning the evangelical movement, the late Billy Graham, the past few years have led me to reflect on how much has changed within that movement in America.

I have spent my entire life in the church, with every big decision guided by my faith. But now I feel homeless. Like so many others, I feel disoriented as I watch the church I have always served turn its eyes away from everything it teaches. I hear from Christian women on a daily basis who all describe the same thing: a tug at their spirit.

Most of these women walked into a voting booth in 2016 believing they were choosing between two difficult options. They held their breath, closed their eyes and cast a vote for Donald Trump, whom many of us then believed to be “the lesser of two evils,” all the while feeling that tug.

I feel it every time our president talks about government housing having no place in America’s suburbs. Jesus said repeatedly to defend the poor and show kindness and compassion to those in need. Our president continues to perpetuate an us-versus-them narrative, yet almost all of our church leaders say nothing.

I feel this tug every time our president or his followers speak about the wall, designed to keep out the very people Scripture tells us to welcome. In Trump’s America, refugees are not treated as “native born,” as Scripture encourages. Instead, families are separated, held in inconceivable conditions and cast aside as less than.

The church honors Trump before God

Trump has gone so far as to brag about his plans, accomplishments and unholy actions toward the marginalized communities I saw my grandfather love and serve. I now see, through the silence of church leaders, that these communities are no longer valued by individuals claiming to uphold the values my grandfather taught.

The gentle tug became an aggressive yank, for me, earlier this year, when our country experienced division in the form of riots, incited in great part by this president’s divisive rhetoric. I watched our president walk through Lafayette Square in Washington, D.C., after the tear gassing of peaceful protesters for a photo op.

He held a Bible, something so sacred to all of us, yet he treated that Bible with a callousness that would offend anyone intimately familiar with the words inside it. He believed that action would honor him and only him. However, the church, designed to honor God, said nothing.

It seems that the only evangelical leaders to speak up praised the president, with no mention of his behavior that is antithetical to the Jesus we serve. The entire world has watched the term “evangelical” become synonymous with hypocrisy and disingenuousness.

My faith and my church have become a laughing stock, and any attempt by its members to defend the actions of Trump at this time sound hollow and insincere.

One of my grandfather’s favorite verses was Micah 6:8, in which we are told that the Lord requires of his people to do justly, to love kindness and mercy, and to walk humbly. These are the attributes of our faith we should present to the world. We can no longer allow our church leaders to represent our faith so erroneously.Get the Opinion newsletter in your inbox.

What do you think? Shape your opinion with a digest of takes on current events.Delivery: DailyYour Email

I have given myself permission to lean into that tug at my spirit and speak out. I may be against the tide, but I am firm in my faith that this step is most consistent with my church and its teachings.

At a recent large family event, I was pulled aside by many female family members thanking me for speaking out against an administration with which they, too, had been uncomfortable. With tears in their eyes, they used a hushed tone, out of fear that they were alone or at risk of undeserved retribution.

How did we get here? How did we, as God-fearing women, find ourselves ignoring the disrespect and misogyny being shown from our president? Why do we feel we must express our discomfort in hushed whispers in quiet corners? Are we not allowed to stand up when it feels everyone else around us is sitting down?

The God we serve empowers us as women to represent Him before our churches. We represent God before we represented any political party or leader. When we fail to remember this, we are minimizing the role He created for us to fill. Jesus loved women; He served women; He valued women. We need to give ourselves permission to stand up to do the same.

If a plane gets even slightly off course, it will never reach its destination without a course correction. Perhaps this journey for us women looks similar. Perhaps you cringe at the president suggesting that America’s “suburban housewife” cares more about her status than those in need, but try to dismiss comments on women’s appearance as fake news.

His Church Got Riddled With Covid19 Now The Pastor Has Died