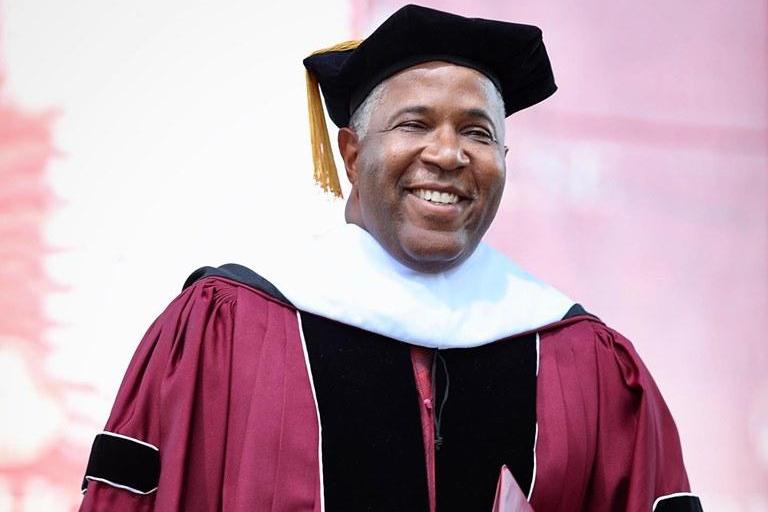 The billionaire businessman, who received an honorary degree from the historically black school, surprised the nearly 400 graduating seniors by announcing his family would provide a grant to pay off student debt for the entire Class of 2019.

“On behalf of the eight generations of my family who have been in this country, we’re gonna put a little fuel in your bus,” Smith said in a video posted on social media.

“This is my class,” he added, “and I know my class will pay this forward.”

The gift to the private, all-male school is said to be worth about $40 million. It comes in addition to a $1.5 million donation Smith gave Morehouse earlier this year for scholarships and a new park.

Some students told the Atlanta Journal Constitution they were graduating with around $90,000 in debt.

Smith is a Cornell grad, and has an MBA from Columbia University. He founded Vista Equity Partners, a software and technology investment firm, which has $46 billion in assets, according to its website.

He is the richest African-American in the United States, with a net worth of $5 billion, according to Forbes. This year he ranks #355 on the Forbes Billionaires List of the world’s richest people.

Smith has Hollywood ties as well after investing in Hidden Empire Film Group — which is run by Deon Taylor and Roxanne Avent. The film group’s recent releases include Meet the Blacks (2016), Traffik (2018), and The Intruder, a psychological thriller released on May 3. The film stars Meagan Good, Michael Ealy, and Dennis Quaid. To date, it has grossed $28 million domestically.

Lisa Bloom, Attorney for the Kardashians and Black Chyna drops ALL of them!