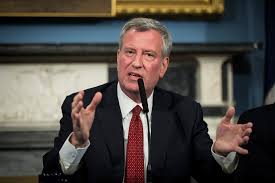 The two-term liberal mayor is expected to visit Iowa and South Carolina after announcing his candidacy on Thursday morning, according to The New York Daily News and NBC News.

De Blasio intends to emphasize his mayoral accomplishments including the creation of universal pre-kindergarten, raising the minimum wage to $15 per hour and overseeing an all-time crime low, according to NBC News, citing a campaign spokesperson.

Good Morning America announced Wednesday that De Blasio and his wife Chirlane McCray will appear on the program on Thursday.

Several candidates appeared on the morning show around the time of their campaign launches.

According to the New York Daily News, de Blasio was expected to announce his presidential run last week, but moved the announcement back.

De Blasio has reportedly been mulling a presidential bid for months and would join a field of more than 20 Democrats competing for the party’s nomination next year.