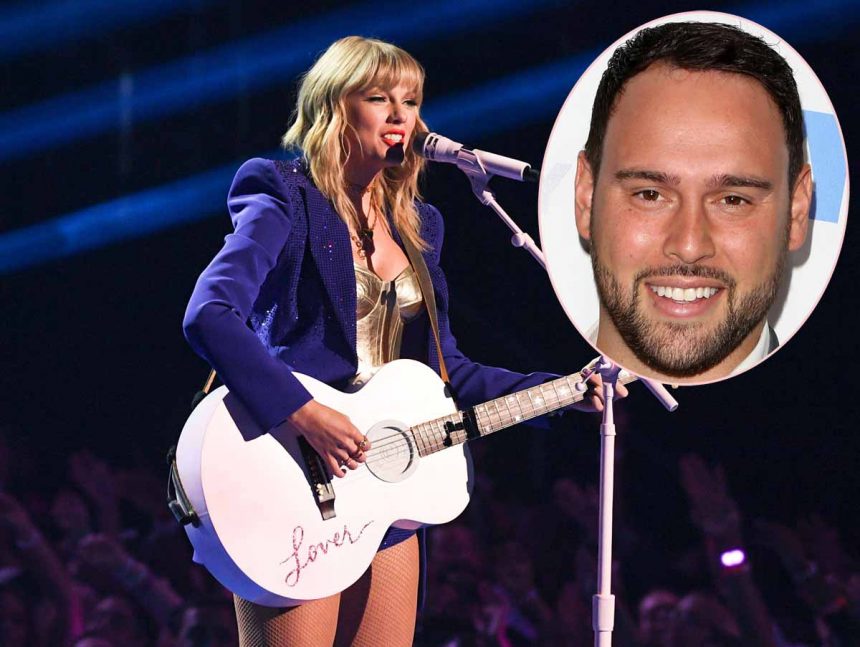 The feud between Big Machine Records and its former musician Taylor Swift is escalating quickly. A source told Entertainment Tonight, the music label’s headquarters in Nashville, Tennessee, had to be shut down early after “hostile death threats”...
by Raquel Jayson November 16, 2019 570 Views

The feud between Big Machine Records and its former musician Taylor Swift is escalating quickly.

A source told Entertainment Tonight, the music label’s headquarters in Nashville, Tennessee, had to be shut down early after “hostile death threats” were received on Friday and employees felt unsafe.

Fans of the 29-year-old musician are also reportedly trying to find personal contact information about the employees, not just executives Scooter Braun and Scott Borchetta, and leak it.

This news comes after Swift took to social media on Thursday accusing Braun, Borchetta, and Big Machine of preventing her from playing songs from her older albums during her upcoming performance at the American Music Awards and blocking production of a Netflix documentary she has been working on.

“Scott Borchetta and Scooter Braun have now said that I’m not allowed to perform my old songs on television because they claim that would be re-recording my music before I’m allowed to next year,” Swift alleged.

Don’t know what else to do

Braun bought Big Machine, which includes the masters to Swift’s first six albums, in a controversial move earlier this summer. Swift previously pledged to re-record all her albums in order to maintain ownership.

“Additionally […] Netflix has created a documentary about my life for the past few years,” Swift continued in her post. “Scott and Scooter have declined the use of my older music or performance footage for this project, even though there is no mention of either of them or Big Machine Records anywhere in the film.”

“As Taylor Swift’s partner for over a decade, we were shocked to see her tumblr statements yesterday based on false information. At no point did we say Taylor could not perform on the AMAs or block her Netflix special,” a statement released on Friday reads. “In fact, we do not have the right to keep her from performing live anywhere. Since Taylor’s decision to leave Big Machine last fall, we have continued to honor all of her requests to license her catalog to third parties as she promotes her current record in which we do not financially participate.”

Scooter Braun, left, and Scott Borchetta pose for a photo at a private residence on June 28, 2019, in Montecito, California. (Kevin Mazur/Getty Images for Ithaca Holdings)

The company, however, claims that Swift is in debt to it to the tune of “millions of dollars” and has rejected requests to mediate the situation privately.

“The truth is, Taylor has admitted to contractually owing millions of dollars and multiple assets to our company, which is responsible for 120 hardworking employees who helped build her career. We have worked diligently to have a conversation about these matters with Taylor and her team to productively move forward,” the statement continued. “We started to see progress over the past two weeks and were optimistic as recently as yesterday that this may get resolved. However, despite our persistent efforts to find a private and mutually satisfactory solution, Taylor made a unilateral decision last night to enlist her fanbase in a calculated manner that greatly affects the safety of our employees and their families.”

Swift’s rep told Fox News that this, too, was not the whole truth. “Big Machine is trying to deflect and make this about money by saying she owes them but, an independent, professional auditor has determined that Big Machine owes Taylor $7.9 million dollars of unpaid royalties over several years.”

In her initial post, Swift alleged that Borchetta “told my team that they’ll allow me to use my music only if I do these things: If I agree not to re-record copycat versions of my songs next year (which is something I’m both legally allowed to do and looking forward to) and also told my team that I need to stop talking about him and Scooter Braun.”

Singer Taylor Swift performs on the stage during the gala of 2019 Alibaba 11.11 Global Shopping Festival at Mercedes-Benz Arena on November 10, 2019 in Shanghai, China. (VCG/VCG via Getty Images)