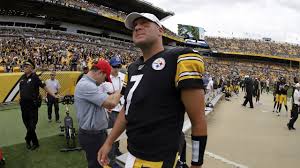 Big Ben Out for the Season

Big Ben will be shut down for the rest of 2019.  The Pittsburgh Steelers announced Monday that quarterback Ben Roethlisberger will undergo surgery to his injured right elbow, will be placed on injured reserve...
by Alycia Pascual-Pena September 16, 2019 223 Views

The Pittsburgh Steelers announced Monday that quarterback Ben Roethlisberger will undergo surgery to his injured right elbow, will be placed on injured reserve and is out for the season.

Surgery was deemed necessary after an MRI on Roethlisberger’s elbow Sunday night. The surgery is expected to take place this week, per the team.

The season-ending news is a brutal blow for the 0-2 Steelers, who hoped to bounce back after missing the playoffs in 2018.

Roethlisberger repeatedly tried to shake out his injured elbow during the first half of Sunday’s home loss versus the Seattle Seahawks. He was taken out of the contest in the second half, replaced by second-year quarterback Mason Rudolph.

The elbow injury that sideswiped Big Ben‘s 2019 season will mark the first games missed by the quarterback since Week 7 of the 2016 season. The last time the Steelers did not have Roethlisberger for 10-plus games was 2003 (Tommy Maddox was the starting QB and the Steelers went 6-10).

Roethlisberger is coming off of a 2018 campaign in which he led the NFL in passing yards (5,129).

Roethlisberger signed a two-year extension with the Steelers during the offseason and is under contract through the 2021 season. For a 37-year-old quarterback who has contemplated retirement in the past, it will be interesting to see what the future holds for the 16-year pro.

With Big Ben out for the year, the Steelers will turn to Rudolph full-time.

The 2018 third-round pick saw his first pro-action in Sunday’s loss, finishing 12-of-19 passing for 112 yards, 5.9 yards per attempt, two touchdown tosses, one interception (which went through the hands of Donte Moncrief) for a 92.4 QB rating and took no sacks in two quarters of play.

As the Steelers head into the unknown sans Roethlisberger for more than a few games for the first time since his rookie season in 2004, the positive is that Rudolph didn’t look overwhelmed in his debut.

A personnel man for an opposing team told NFL Network’s Mike Garafolo on Monday that Rudolph’s display could provide a modicum of hope for the Steelers.

“Obviously it’s a huge loss because of (Roethlisberger’s) experience and what he’s done, but with the way Mason Rudolph played in the preseason and yesterday, they’ll be in better shape than a lot of other teams would be,” the source told Garafolo.

Rudolph looked comfortable managing the pocket Sunday, displayed poise and ability to get to his second read. There was still some roughness around the edges, but the hope is with regular practice and playing time moving forward, Rudolph could become a potential long-term answer for the Steelers.

The second-year signal-caller already received rave reviews from teammates after the loss for how he handled the situation.

“He handled himself really well,” guard David DeCastro said. “Really proud of him, how he came in ready to go. He knew the playbook, had a big command, and he mixed some of the cadences, too. That was impressive.”

With Roethlisberger done for the year, the Steelers will need more impressive play from Rudolph to turn around their season in a hurry.