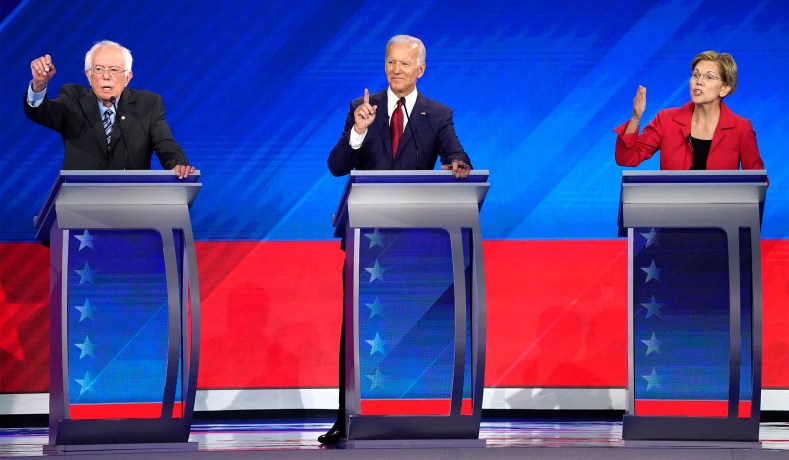 At Tuesday night’s Democratic debate, former Vice President Joe Biden said he stood behind son Hunter Biden and stressed that neither had done anything wrong in connection with Ukraine — despite President Donald Trump spreading baseless...
by Zach Freeman October 15, 2019 264 Views

At Tuesday night’s Democratic debate, former Vice President Joe Biden said he stood behind son Hunter Biden and stressed that neither had done anything wrong in connection with Ukraine — despite President Donald Trump spreading baseless claims to the contrary.

“What I think is important is we focus on why it’s so important we remove this man from office,” Biden, 76, said from the debate stage in Ohio.

“My son did nothing wrong,” he said, “I did nothing wrong.” His work in Ukraine while in office was in “rooting out corruption,” he said. Trump’s contentions to the contrary — for which there is no evidence — only showed how big a threat Biden was, he said.

“He knows if I get the nomination, I will beat him like a drum.”

Biden is the front runner to challenge Trump in next year’s election and he has become the main focus of Trump’s ire among the field of Trump’s Democratic rivals.

In recent months, in what has become the center of an impeachment investigation into Trump, the president lobbied Ukraine to investigate the Bidens over his “corruption” conspiracy, which critics have called an obvious abuse of power for political gain.

Trump has insisted he did nothing wrong and, earlier this month, contended to reporters that he had a “duty” to investigate “corruption.” He has decried the House of Representatives’ impeachment inquiry as “harassment” and a “witch hunt.”

Biden’s son Hunter on Tuesday broke his silence about the Ukraine scandal, telling ABC News that he and his dad had not acted improperly. But he acknowledged a mistake in even allowing the appearance of a conflict, because he was a private businessman in some of the same areas of the world where his dad was working while in office.

Asked about whether he believed he had also made a misjudgment regarding his son’s business dealings while vice president or if Hunter’s choices back then were okay, even if they did nothing illegal, the elder Biden shrugged off the question.

“My son’s statement speaks for itself,” he said, adding, “I never discussed a single thing with my son having to do with Ukraine.”

Gina Rodriguez faces backlash for rapping the N-word on Instagram