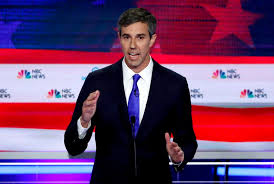 Presidential candidate Beto O’Rourke reiterated his support for a mandatory gun-buyback program of assault-style rifles on Thursday and said, “Hell, yes, we’re going to take your AR-15, your AK-47.“”We’re not going to...
by Alycia Pascual-Pena September 13, 2019 262 Views

Presidential candidate Beto O’Rourke reiterated his support for a mandatory gun-buyback program of assault-style rifles on Thursday and said, “Hell, yes, we’re going to take your AR-15, your AK-47.We’re not going to allow it to be used against our fellow Americans anymore,” the former Texas congressman said during the third Democratic presidential debate, hosted by ABC News. “If the high-impact, high-velocity round, when it hits your body, shreds everything inside of your body because it was designed to do that so that you would bleed to death on a battlefield … when we see that being used against children,” O’Rourke said. He recalled talking to a woman in Odessa, Texas, who had watched her 15-year-old daughter bleed to death after she was shot by a man wielding an AR-15 late last month.

O’Rourke’s comments come in the wake of a string of mass shootings in the United States, including in his hometown of El Paso, where 22 people were gunned down at a Walmart in August. O’Rourke unveiled a proposal weeks after that shooting calling for a national gun registry, a nationwide gun licensing system and the mandatory buyback of assault-style rifles as part of his plan to curb gun violence and the rise of white nationalism.

Republican Texas state Rep. Briscoe Cain threatened O’Rourke on Twitter Thursday night in response to the buyback comments, tweeting, “My AR is ready for you Robert Francis.”Cain’s tweet was subsequently removed by Twitter because it violated the company’s rules against violence and wishing harm against others, a Twitter spokesperson told CNN. O’Rourke was quick to respond over the same social media platform, and characterized Cain’s words as “a death threat.” O’Rourke’s press secretary Aleigha Cavalier told CNN’s Leyla Santiago that the campaign was reporting the tweet to the FBI.”Any time you have somebody threatening to use violence against somebody in this country to resolve a political issue really for any reason, that’s a matter for law enforcement,” O’Rourke told CNN’s Alisyn Camerota on “New Day.” “Representative Briscoe Cain is making the case that no one should have an AR-15 that they can hold over someone in this country. ‘Look, if we disagree on something, let me introduce you to my AR-15.’ Absolutely wrong.”In Twitter’s rules on safety, the company specifically states, “you may not threaten violence against an individual or a group of people.” Cain’s tweet had been live on the platform for more than two hours, and some users responded to the tweet saying they would report it to Twitter and the FBI.O’Rourke told CNN’s DJ Judd early Friday that Cain’s tweet constituted a threat. “Yeah, it sure reads like one to me, and I think it’s a really irresponsible thing for him to do, especially somebody who is a public servant and in a position of public trust to be sending that kind of message to this country,” O’Rourke said. “We are a nation of laws, and if that ends up becoming the law of the United States of America, then we expect the people of this country to comply with it.”Cain on Friday told CNN that his words were “not a true threat at all” and accused O’Rourke of spinning his tweet into a death threat. “What this really shows is how, how dangerous some of this is that people want to try and spin somebody’s words in order to try and take their guns away,” Cain said, adding that FBI has not reached out to him.

‘God love you for standing in the middle of that tragedy’

O’Rourke did recieve praise from his fellow Democratic contenders on Thursday night for his actions following the shooting in El Paso. “The way he handled what happened in his hometown — to look in the eyes,” former Vice President Joe Biden said. Fellow Texan Julián Castro praised O’Rourke for “how well he has spoken to the passion and the frustration and the sadness” after the shooting. “And Beto, God love you for standing in the middle of that tragedy,” said Sen. Kamala Harris of California.Sen. Amy Klobuchar of Minnesota said, “I so appreciate what the congressman’s been doing.” Sen. Cory Booker of New Jersey needled O’Rourke later, saying he was sorry it had taken the El Paso shooting for O’Rourke to embrace the position Booker already held, backing a mandatory buyback and national registration.O’Rourke’s support for gun licensing is a reversal from May, when he was asked about a similar proposal from Booker and said it “may be too far.”