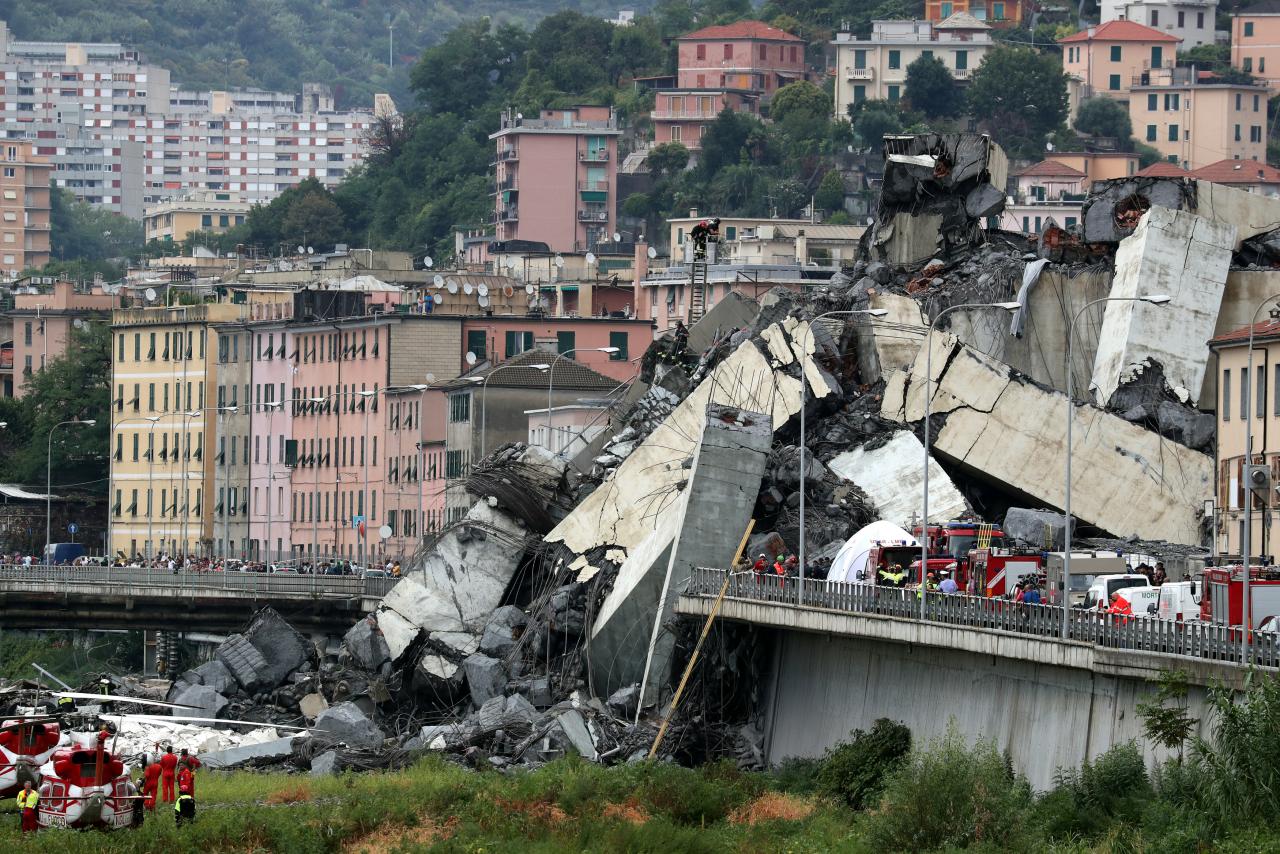 A bridge on a main highway linking Italy with France collapsed Tuesday in the Italian port city of Genoa during a sudden, violent storm, sending vehicles plunging almost 300...
by Raquel Jayson August 14, 2018 384 Views

A bridge on a main highway linking Italy with France collapsed Tuesday in the Italian port city of Genoa during a sudden, violent storm, sending vehicles plunging almost 300 feet into a heap of rubble below. Genoa Mayor Marco Bucci told Italy’s Sky TG24 that more than 25 people were confirmed dead and 10 more rescued with injuries. Italian fire service officials told Italy’s ANSA news agency that at least 35 people had been killed.

Officials have warned that the death toll will likely rise further as the rescue and recovery effort continues.

Amalia Tedeschi, a firefighter, told RAI state TV that some 20 vehicles, including cars and trucks, had been involved in the collapse of a stretch of bridge some 260 yards in length. She said two people had been pulled alive from vehicles in the rubble, which fell into an industrial area below the bridge. Officials said they were being transported by helicopter to a hospital.

French news agency AFP said it was a portion of the five-decade old Morandi highway bridge that collapsed. CBS News’ Anna Matranga reports there was maintenance work being performed on the bridge. Italian fire services said the bridge, in an industrial area in west Genoa, fell down at 5 a.m. Eastern time.

The private broadcaster Sky TG24 said a 200-yard section of the Morandi Bridge collapsed over an industrial zone, sending tons of twisted steel and concrete debris onto warehouses below. Firefighters told The Associated Press they were worried about gas lines exploding in the area from the collapse.

Photos published by ANSA on its website showed a huge gulf between two sections of the bridge. Deputy Minister Rixi said it was “the biggest tragedy involving a bridge of this importance in Europe in the last decades.”

Video captured the sound of a man screaming: “Oh God! Oh, God!” Other images showed a green truck that had stopped just short of the gaping hole in the bridge and the tires of a tractor trailer in the rubble.

ANSA said authorities suspected that a structural weakness had caused the collapse, but there was no immediate explanation by authorities for why they might have thought that or what had happened.

The disaster occurred on a highway that connects Italy to France, and northern cities like Milan to the beaches of Liguria. It came on the eve of a major Italian summer holiday on Wednesday called Ferragosto, which means traffic was heavier than usual as Italians traveled to beaches or mountains.

The Morandi Bridge is a main thoroughfare connecting the A10 highway that goes toward France and the A7 highway that continues north toward Milan. Inaugurated in 1967, it is 295 feet high, just over half a mile long, with the longest section between supports measuring more than 200 yards.

It’s too early to say what caused the deadly collapse of a highway bridge in the Italian city of Genoa, but corrosion or weather conditions could have been part of the cause, a structural engineer specializing in bridges told the Associated Press.

“As this reinforced and prestressed concrete bridge has been there for 50 years it is possible that corrosion of tendons or reinforcement may be a contributory factor,” said Ian Firth, former president of The Institution of Structural Engineers.

Firth said the bridge is an unusual design but is similar to a larger bridge in Venezuela, and both were designed by Riccardo Morandi.

French President Emmanuel Macron offered Italy his country’s help after the collapse, and said in both French and Italian on Twitter that: “Our thoughts go to the victims, their relatives and all the Italian people. France stands by Italy in that tragedy and is ready to provide all necessary support.”

The collapse of the bridge comes eight days after another major accident on an Italian highway, one near the northern city of Bologna. In that case, a tanker truck carrying a highly flammable gas exploded after rear-ending a stopped truck on the road and getting hit from behind itself. The accident killed one person, injured dozens and blew apart a section of a raised eight-lane highway.

Video: Jazz Artist Robert Glasper speaks out on what he thinks about Lauryn Hill