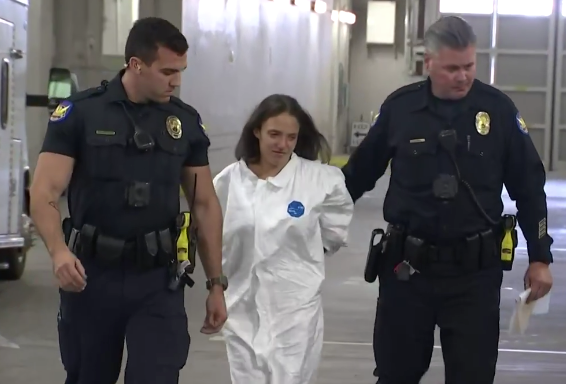 A Mom who is accused of smothering her three kids to death allegedly sang while killing them before propping their bodies on a sofa as if they were sleeping. ...
by Raquel Jayson January 22, 2020 224 Views

A Mom who is accused of smothering her three kids to death allegedly sang while killing them before propping their bodies on a sofa as if they were sleeping.

Rachel Henry, 22, was charged with three counts of first-degree murder after admitting she harmed the children in her home in Phoenix, Arizona.

Phoenix Police Department Sgt Mercedes Fortune said: “We are comfortable in saying now that the mother is responsible for the death of her children.”

According to some reports, Henry was a drug user and had lately been acting strange.

The kids — a one-year-old girl, a seven-month-old girl and a three-year-old boy — were found in a living room area near the front door of the home at 7.30pm.

Henry was said to have smothered the three children one by one before lining up their bodies in their Phoenix home, according to court documents.

She allegedly told police she smothered her one-year-old first, wrestling with the child before placing her hand over the child’s mouth while she continued to kick in protest.

Meanwhile her three-year-old son yelled at his mother to stop.

But she continued to smother the baby until she stopped breathing, according to the report. She left the body in the back bedroom.

“Rachel knew she killed the one-year-old female when she stopped kicking,” a Phoenix police investigator wrote.

Henry then chased her three-year-old into a back bedroom before smothering him.

“Rachel described singing to the three-year-old as he scratched her chest and pinched her,” the report detailed.

She next fed the seven-month-old female a bottle in her bedroom until she fell asleep.

A court document said she sang her a song while killing her.

The children’s little bodies were then placed on the living room floor as though they were taking a nap, the report says

A relative who lives at the house called police late Monday, and officers found the kids in a living room with no obvious trauma.

Officers performed CPR on the little children but they were pronounced dead by paramedics.

Detectives haven’t determined exactly what happened in the final moments leading up to the children’s tragic deaths.

The Maricopa County Medical Examiner’s Office will determine how they died.

They’re now trying to figure out what prompted Henry to commit such a senseless act.

Henry, who recently moved to Arizona from Oklahoma, was arrested Tuesday and charged with first-degree murder.

McDonald’s Has Turned The Big Mac Special Sauce Into A Dipping Sauce For Nuggets: Available Feb. 12th: Will it hit like Popeye’s Chicken Sandwich