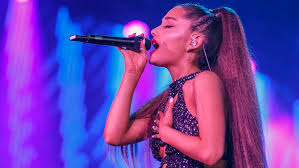 Ariana Grande finally dropped a new album and fans are going crazy over it!

February is the month of love, so naturally, Ariana Grande, 25, delivered a new album, Thank U, Next, named after her well-known breakup anthem. The singer dropped her latest...
by Joy Smith February 9, 2019 726 Views

February is the month of love, so naturally, Ariana Grande, 25, delivered a new album, Thank U, Next, named after her well-known breakup anthem. The singer dropped her latest record just six months after she released Sweetener, but her new album is eliciting the a whole new wave of fan reactions. Fans are absolutely loving all 12 tracks, which dropped on Feb. 8. Arianators everywhere took to Twitter to show for the new record! “THANK U NEXT IS THE SH*TTTTT 🔥🔥🔥 IM LISTENING TO IT RIGHT NOWWWWW,” one fan tweeted minutes after the new music hit Spotify, and another added, “ARIANA GRANDE DID THAAAAAAAAAAAAAAAT.” As you can see, this album drop calls for all caps.

The title track, “Thank U, Next,” stole fans’ hearts when it dropped on in November. In fact, it was streamed 100 million times in just 11 days following its November 3 release! Fans are also falling head-over-feels for the cheeky new track, “Break up with your girlfriend, i’m bored,” and of course, are throwing a dance party each time “7 Rings,” comes on. We have to hand it to her – Ari filled this album with 100% certified BOPS.

As Ari pumps out new music, fans are readying themselves for her forthcoming tour! The pop star is set to perform her new tunes when she hits the road this Spring, and she’s taking a few friends with her! Her “Thank U, Next” songwriters, Social House, will be there, and fans think her ex, Ricky Alvarez, will be joining too! Ari and her ex are still the best of pals, and the theory stems from a few not so subtle social media hints! When the pop star’s ex-flame posted a pic from Ari’s “7 Rings” party, Ariana commented on it, writing: “the best team, see y’all on touuur.” Sounds like concrete evidence to us!

Chris Brown Drags Cardi B into drama with Offset!

Driver Being Followed by Police Killed in Suspected DUI Crash shortly after!