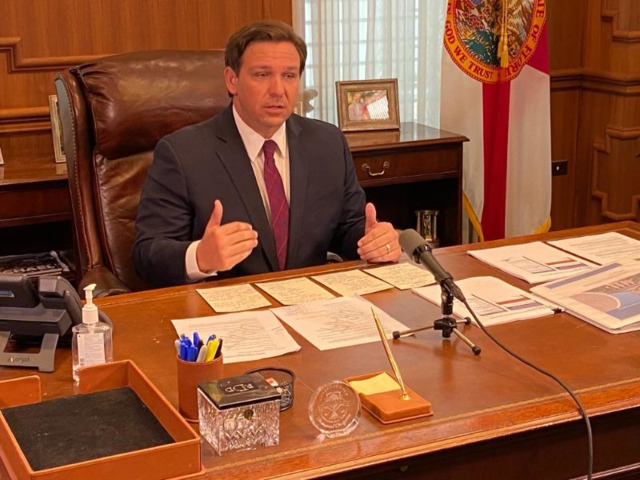 Gov. Ron DeSantis on Monday said he is taking measures to prevent people from fleeing coronavirus “hotspots” and coming to Florida, where they could contribute to further spread of...
by Raquel Jayson March 24, 2020 283 Views

Gov. Ron DeSantis on Monday said he is taking measures to prevent people from fleeing coronavirus “hotspots” and coming to Florida, where they could contribute to further spread of the virus.

DeSantis said he will issue an executive order directing the Florida Department of Health to require travelers from New York and New Jersey to self-isolate for 14 days after flying into Florida airports. Violators, DeSantis said, could be charged criminally.

“There’s over 190 direct flights from the New York City area to the state of Florida, and I would reckon given the outbreak there, that every single flight has somebody on it who is positive for COVID-19,” DeSantis said. “And so as we are working to stop it in the state of Florida, you’re consistently having people come in from one of the top hotspots in the entire world. We don’t have people coming from Wuhan (China), we don’t have people coming from Milan (Italy), yet you have a flood of people still coming from New York City.”

DeSantis said he had spoken to President Donald Trump about his plans to issue the quarantine requirements for the out-of-state travelers.

It was not clear Monday evening if the executive order would affect travelers coming from all states where “shelter in place” requirements have been issued or just New York and New Jersey. It would not apply to people who drive into Florida.

DeSantis’ announcement came as criticism about Florida’s response to COVID-19 mounts, along with the numbers of infected residents and deaths.

Florida has “community spread” of the highly contagious disease, with people not sure how or where they were infected. But DeSantis has not followed other states, including New York, New Jersey and California, in issuing a shelter-in-place mandate, which generally would require people to stay home except for essential activities.

DeSantis said such requirements can cause more harm than good.

“It’s not clear to me that doing a massive shutdown of the entire state would even work. I think you are seeing, in some of the states that have done this, there has really been huge noncompliance,” DeSantis said. “In New York City, it’s like the party never ended. You have got people congregating all over the place. You see images from California, in Orange County. I don’t think the beaches have ever been so crowded, with people going out. Again, these are people who have been ordered to shelter in place, and they are not complying with those orders. The fact of the matter is, a governor is not going to start imprisoning people just because they leave their house. So, you are going to have a lot of noncompliance.”

DeSantis also has been criticized for not ordering all beaches to close, even as pictures of droves of college students on spring break made national headlines.

DeSantis allowed local government officials to take the lead on that issue, saying Monday that not all beaches attract the same crowds.

“If you have a mother just walking down the beach with her daughter, I think that can be done safely,” he said. “If they (local governments) are willing to put the resources in, I want to give them a chance to do it. That is much different than (a beach partier) doing a Jell-o shot off somebody’s stomach. We are not tolerating that. We’ve told them that the party is over, and I am glad they’ve finally listened.”

DeSantis on Friday s issued an executive order blocking restaurants statewide from serving food in their dining rooms and closing all gyms.

As of 6 p.m. Monday, the state had 1,227 total cases of the coronavirus and 18 deaths of Florida residents. New York, by comparison, had 20,875 positive cases as of Monday afternoon, with more than 12,300 from New York City, according to New York state figures.

All your friends are using Zoom, the video-chat app that is suddenly dominating competition from Google and Microsoft