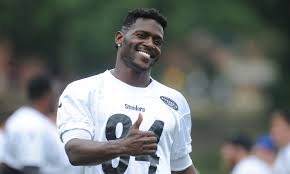 STAYIN’ IN SHAPE Antonio Brown isn’t giving up on his pro football career … the embattled WR is still training as if he’s expecting to get back on the field...
by Alycia Pascual-Pena October 7, 2019 191 Views

Antonio Brown isn’t giving up on his pro football career … the embattled WR is still training as if he’s expecting to get back on the field this season — despite some major obstacles.

AB posted footage on Monday showing him working out on a football field in the Fort Lauderdale area … near his 84/7 training facility.

The workout comes days after the NFL Player’s Association reportedly filed a grievance on his behalf, seeking $40 million from the Patriots and Raiders in unpaid salary, fines and unpaid guarantees.

Of course, Brown was cut by BOTH teams earlier this season over bizarre off-the-field conduct.

The Raiders cut bait back in Sept. after a dispute with GM Mike Mayock led to AB secretly recording a phone call with head coach Jon Gruden. Brown posted the call to social media.

The Patriots picked him up hours after the Raiders let him go … but days later a lawsuit was filed against the WR alleging multiple incidents of sexual assault, including violent rape. The NFL has since launched its own investigation into the allegations.

But, the last straw seemed to be when Brown allegedly texted another woman who had accused him of sexual misconduct and made what she considers menacing threats against her family. The Patriots cut Brown after learning about the text messages.

Brown went to social media and attacked Patriots owner Robert Kraft after the move — bringing up his prostitution case in Florida — saying there’s a double standard in the NFL.

After he was released, Brown tweeted, “Sad [NFL teams] can just void guarantees anytime going on 40m 2 months will see if they pay up!”

Brown’s agent, Drew Rosenhaus, has previously said AB wants to get back to work and play for another NFL team — and Drew insists there are interested parties.

So, in the meantime, Brown is staying in shape in case he gets a call. But, from what we’re hearing, don’t expect to see Brown in an NFL uniform any time soon.

This Mental Health Patient Said He Wanted The Police To Kill Him And When They Arrived They Did! #RIP