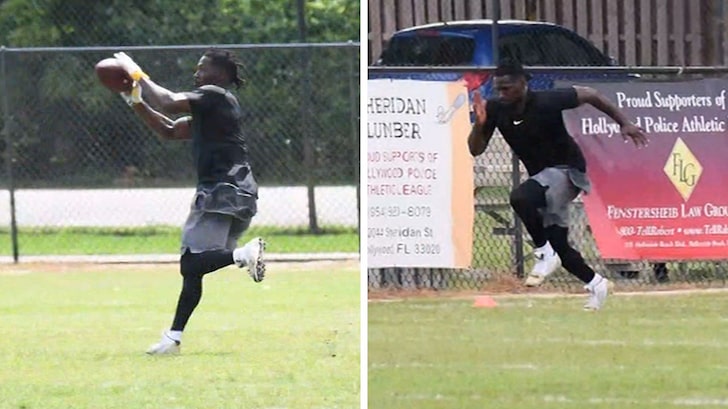 Antonio Brown has such a great relationship with the police in Hollywood, Florida … they’re letting him work out on their official football field — and he looks damn good....
by Raquel Jayson October 10, 2019 156 Views

Antonio Brown has such a great relationship with the police in Hollywood, Florida … they’re letting him work out on their official football field — and he looks damn good.

Check out this footage of AB running routes and catching passes during a Thursday afternoon workout … he’s clearly the best unemployed WR on the planet.

When we started digging around about the location of the workout, we learned the venue is the official football field of the Hollywood Police Athletic League.

We called the HPAL and a staffer told us AB has been working out there for years — since his Pittsburgh Steelers days — and he’s got a great reputation with the cops.

In other words, they’re happy to host Brown while he tries to get back in the NFL.

What’s weird is that Brown is alleged to have raped a woman in Hollywood, Florida in 2018 — and while the accuser never filed a criminal complaint against him, her civil lawsuit is currently active.

For the record, Brown has adamantly denied the allegations against him.

Brown was also investigated by the Hollywood P.D. back in January when a woman — who has a child with the NFL star — accused him of getting physical with her during a heated argument.

The woman initially went to police to file a domestic violence complaint against Brown — but later had a change of heart and stopped cooperating with law enforcement.

Brown was never charged with a crime — and he’s denied all allegations in that case.

Look, the cops don’t seem to be doing anything wrong by letting AB work out there. But, it is a weird look.