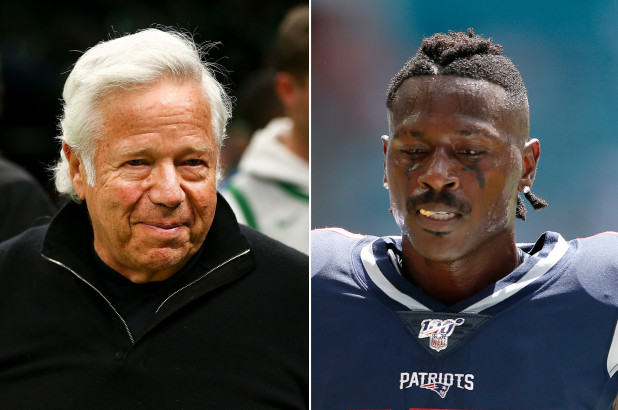 Antonio Brown Has No Takers Right Now He Thanks The Patriots

New England Patriots owner Robert Kraft was “enraged” when he learned of threatening messages Antonio Brown sent to one of the women accusing him of sexual harassment, according to a report.

Kraft was on a business trip when he learned of the latest accusations against the troubled wide receiver, The Athletic said.

Kraft then decided with coach Bill Belichick to release Brown, a move which came immediately after reports surfaced Thursday that Brown texted the woman in a group chat with his underlings and accused her of trying to extort money from him.

“Let’s lok[sic] up her background history see how broke this girl is,” Brown allegedly texted the unnamed accuser Wednesday night, after she publicly accused him of firing her from a painting job at his home after she rejected his sexual advances.

The woman provided screenshots of the alleged texts to Sports Illustrated.

The team cut Brown just 11 days after signing him.

“The NFL and the Patriots clearly took our client’s concerns seriously,” lawyers Lisa Banks and Debra Katz of Katz, Marshall and Banks, said in a statement. “She wanted the threats and intimidation to stop and we hope that will be the case. The NFL has assured us that regardless of Antonio Brown’s roster status, it will continue to investigate all claims regarding his behavior.”

Mayor Of Chicago Ask For Prayers For Police Officer Shot This Morning!