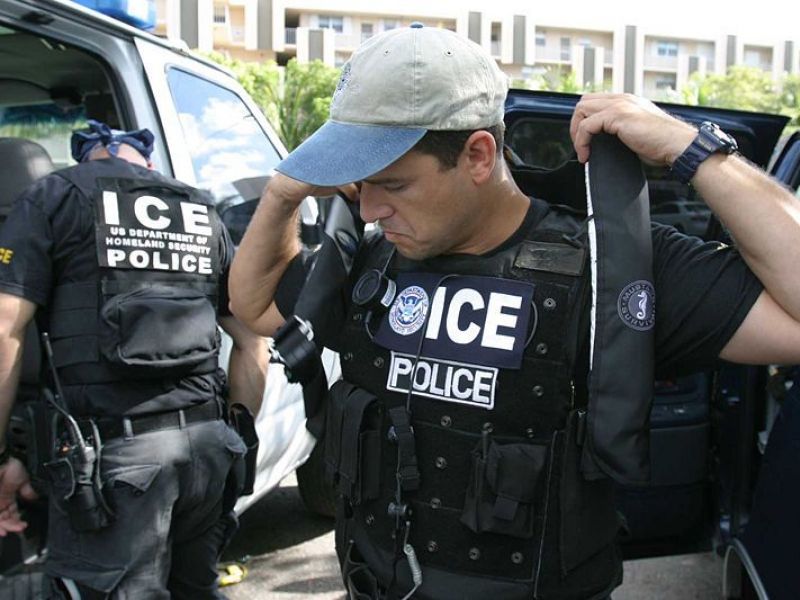 Another immigrant goes to a sanctuary to prevent deporation

Marco Antonio Reyes Alvarez was supposed to get on a plane Tuesday morning to return to his native Ecuador as ordered by immigration officials. But instead the 45-year-old Meriden...
by Katricia Brown August 9, 2017 511 Views

Marco Antonio Reyes Alvarez was supposed to get on a plane Tuesday morning to return to his native Ecuador as ordered by immigration officials. But instead the 45-year-old Meriden father went to a city church to seek sanctuary.

Reyes Alvarez entered the First and Summerfield United Methodist Church on College Street Tuesday morning. He exited the building briefly later in the day to address a crowd of supporters gathered outside.

“This morning, I was supposed to be at the airport at 7:45, but after speaking with my wife and children, I had the difficult decision to seek help and stay in this holy place,” Reyes Alvarez said in Spanish as he stood behind the church’s iron fence. His son-in-law, Bryan Martinez, translated his words to English. 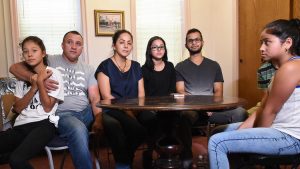 “Just the thought of being separated from my loved ones — and on top of that the chance that I would never see them again — was a very heavy burden for them, and of course for me,” he said.

Reyes Alvarez is the second undocumented immigrant to seek sanctuary in a New Haven church in recent weeks. Last month, Nury Chavarria of Norwalk sought sanctuary from deportation at Iglesia de Dios Pentecostal Church before a federal judge in immigration court in Hartford granted Chavarria a motion for an emergency stay.

“He had to make a really hard decision,” Evelyn Reyes, Reyes Alvarez’s 23-year-old daughter, said. “It’s hard for him, it’s hard for all of us.”

“You have to understand that there is no planning with this. It’s an emergency,” Lugo said. “We were going over to say goodbye last [Monday] night, and he texted us and said, ‘I’m going to take the sanctuary.'”

Lugo said he then reached out to his organization’s network of sanctuary churches and arranged for Reyes Alvarez to take refuge at First and Summerfield.

“We plan to support them as much as they plan to be here,” Lugo said.

The church’s leader, the Rev. Juhye Hahn, said she received a text asking if Reyes Alvarez could take refuge in First and Summerfield. “We didn’t ask where he originally came from,” she said. “We just saw this person’s great need for sanctuary.”

Federal immigration officials said Tuesday that they consider Reyes Alvarez a fugitive, but it’s unlikely they will enter the church to take him into custody.

“We will actively pursue him, and if he steps outside that church he’ll be arrested,” Shawn Neudauer, a public affairs officer for U.S. Immigration and Customs Enforcement, or ICE, said. “We don’t go to sensitive locations — schools, hospitals and churches are on that list. As long as he stays in that church we will probably — most likely — not arrest him.”

Neudauer said in 2010, Reyes Alvarez filed petitions to reopen his case and requested a stay of removal from the Board of Immigration Appeals and the 2nd U.S. Circuit Court of Appeals in New York. Both were denied, he said.

Reyes Alvarez requested another stay of removal from ICE in 2016, which was granted while he pursued additional legal options in his case, Neudauer said. After he exhausted those options, ICE notified him that the agency planned to carry out his removal order.

Last week, he again petitioned the Board of Immigration Appeals to reopen his case and requested another stay of removal. The appeals board denied the stay, allowing ICE to proceed with the case, Neudauer said.

Neudauer said ICE will be “keeping tabs” on Reyes Alvarez. A federal immigration judge’s orders cannot be ignored, he said.

“ICE and the courts can delay acting on an order to ensure all applicable legal processes and possible benefits are followed and/or reviewed, which occurred in this case,” Neudauer said. “However, after these legal options are exhausted, ICE must still carry out the judge’s order in the absence of any other mitigating factors.”

Blumenthal said Reyes Alvarez could be eligible for asylum since his brother-in-law was murdered in Ecuador by a man who has threatened other members of his family. A relative recently fled to America after being menaced by the murderer, who has been released from prison.

Sending Reyes Alvarez back to Ecuador would put his life in danger, Blumenthal said.

“He has a valid claim for asylum. That claim has never received a fair hearing,” Blumenthal said. “And as a law enforcer, I say, ‘Give him his day in court. Give him a hearing.'”

Reyes Alvarez did not consult his lawyer before seeking sanctuary, Blumenthal said, and he only learned of Reyes Alvarez’s decision Tuesday morning.

Under President Trump’s administration, ICE has shifted its focus from deporting people with criminal records to “literally anyone,” Blumenthal said.

“It’s a policy of rounding up everyone who’s undocumented,” he said, “rather than targeting people who are dangerous or have criminal records and pose a threat to our national security.”

Blumenthal called Reyes Alvarez “a hardworking father and husband who has called Connecticut home for two decades without any criminal wrongdoing.”

Reyes Alvarez came to the United States from Ecuador in 1997, escaping violence with his wife, Fanny, and two young children. Now a father of three and the sole breadwinner for his family, Reyes Alvarez installs dry wall and does construction work statewide.

His attorney Erin O’Neil Baker said her client was apprehended by Immigration and Customs Enforcement officials in 2007 when a vehicle he and his family were passengers in accidentally crossed the Canadian border.

Baker said he fought removal from the country at that time, but in 2009 was issued a deportation order. Since then he has been granted stays of deportation that allowed him to remain in the country with his family.

“The norm prior to January 2017 is that if you have an order, you file a stay and it’s granted,” Baker said.

This year, when Reyes Alvarez checked in, he was told he would need to leave the country by Aug. 8.

Baker filed a motion in federal court last week to reopen Reyes Alvarez’s removal order on the grounds that it would be dangerous for him to return to Ecuador. The motion was denied Monday.

Outside the church Tuesday, New Haven Mayor Toni Harp said the city would continue to shelter undocumented immigrants like Reyes Alvarez from the reach of ICE agents.

“Just to be clear: New Haven will remain a sanctuary city,” she said, drawing cheers from the crowd, which swelled as Tuesday evening wore on. “We are not going to engage in helping to report our law-abiding residents.”

Reyes Alvarez said he was worried deportations would escalate under the new administration, but was slightly relieved when President Trump announced ICE would focus on undocumented immigrants with criminal records.

“Trump in the beginning was saying he was going to deport all the criminals,” he said. “But the group of people who are being deported, [I] don’t believe are criminals.”

Employee Suspected in Theft of Around $20K From Church

So Sad! Toddler at a Homicide Scene photo will leave you speechless!