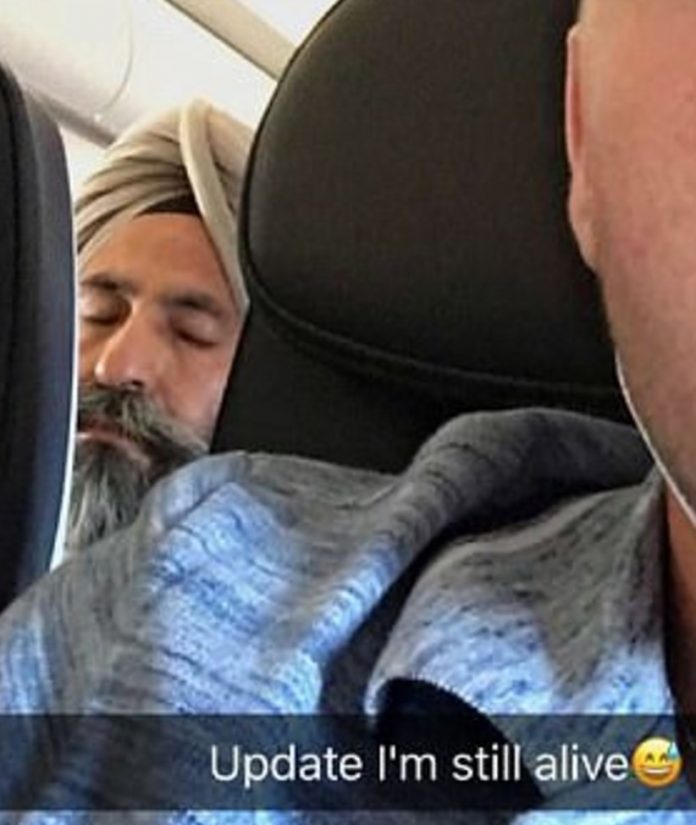 As I continually say the most horrible people in this country aren’t muslims, minorities or Sikhs, it is… WHITE PEOPLE… That is who people should be afraid of. Man can’t...
by Crystal Smith June 24, 2017 774 Views

As I continually say the most horrible people in this country aren’t muslims, minorities or Sikhs, it is…

That is who people should be afraid of. Man can’t even sleep on the plane without this racist POS posting BS on social media.

Social media users were outraged when a series of racist Snapchat posts by an airline passenger who mistakenly believed a Sikh man was a terrorist went viral.

The Snapchat user posted a number of pictures of himself on an airplane sitting not far from another passenger in a turban.

‘Never mind I might not make it to Indy,’ the Snapchat user writes in the caption which was superimposed on a photograph of the Sikh man.

In another Snapchat post, he took a photograph of the Sikh passenger as he sat behind him. ‘Update I’m still alive,’ the caption reads. He added an emoji indicating that he was relieved.

In another Snapchat picture, the Sikh man is seen falling asleep.

Another photo shows the Snapchat user taking a selfie.

The caption reads: ‘OK he just walk to the back of the Plane then to the front then to his seat.’ The captionends with a number of emojis indicating fear or alarm. It is believed the pictures were posted on Snapchat earlier this week.

This Snapchatter who I really wished they identified is out there in society, do you feel safe? I don’t.