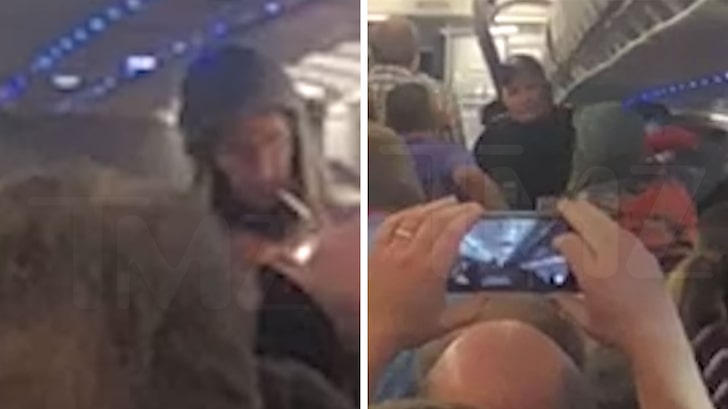 Play video content 9:31 AM PT — A rep for American Airlines tells TMZ … “Flight 2408 diverted due to a disruptive passenger. Law enforcement met the flight, and the...
by Raquel Jayson September 21, 2019 421 Views

9:31 AM PT — A rep for American Airlines tells TMZ … “Flight 2408 diverted due to a disruptive passenger. Law enforcement met the flight, and the aircraft re-departed.” They also thanked their crew members for taking care of their customers during the chaos.

An American Airlines jet made an unscheduled landing Friday after a passenger lit up a joint and got super aggro.

We’re told the plane was going from Phoenix to Minneapolis, but an hour into the flight the pilot went on the intercom and said they had to make an emergency landing in Denver because of “a security issue in the back.”

The passengers were a little freaked out, trying to figure out what was going on. The buzz in the cabin was that someone in the back said he was telling everyone around him, he was on cocaine. That’s when the guy with dreads in the video ran to the back of the plane into the bathroom and locked the door.

Passengers tell us the flight attendants were super concerned and huddled around the bathroom door, trying to coax the guy out, to no avail.

That’s where the video starts … you see the guy pull out a joint and a lighter, and start smoking. The pilot then came on the intercom and asked passengers in the first 13 rows to get off the plane, so they could remove the man. As they deplane, the guy punches one of the passengers.

You hear one passenger say there were Raiders fans onboard so they could take care of the guy.Play video content

Cops and EMTs removed the guy, handcuffed him and put him on a gurney. You hear him scream the cuffs were hurting him as he demanded to be freed, screaming, “Take it off, it hurts. I’ll f***ing kill you!”

About 2 hours later, the plane was back up in the air … en route to Minneapolis.

Pastor Benny Hinn Says He No Longer Believes In The Prosperity Gospel.

Everyone In Kevin Hart’s Car Crash Has Lawyer-ed Up!