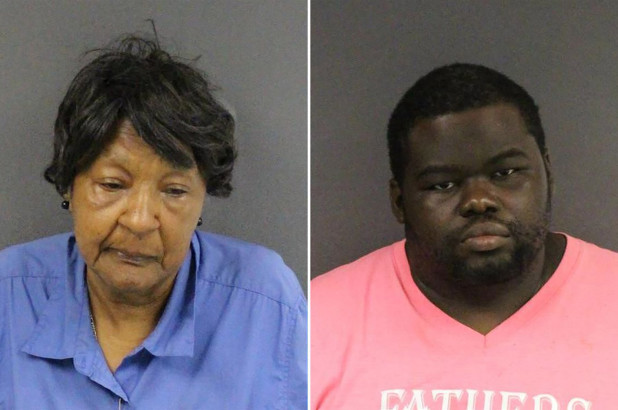 An alleged pill-peddling grandmother known as “Mama Dean” was one of three people who used the same handgun to kill a young man and wound a teen at a New Jersey laundromat, according to a report.

Eudean McMillan, 74, was accused of shooting several people who were attacking Darryl Parker, 37, at the Liberty Laundromat III in Trenton about noon Monday, according to the Trentonian.

A second victim, a 16-year-old boy who also had been shot, remains hospitalized in critical condition, Mercer County Prosecutor Angelo Onofri said in a statement.

McMillan was charged as an accomplice to murder, along with two counts of attempted murder and weapons offenses.

She was accused of providing the gun Parker and the 15-year-old used to shoot Fanfan as he hid behind a counter in the back of the laundromat.  TOP ARTICLES1/5Eli Manning’s reaction, and whereGiants go from this mess

Parker and the 15-year-old, whose name was not released because of his age, face murder and weapons charges in Fanfan’s slaying.

Parker was released from prison in May after serving nearly 14 years for multiple robbery counts, according to state records cited by the Trentonian.

It was unclear how the 15-year-old teen — who prosecutors confirmed is related to McMillan — was involved in the initial melee that preceded the deadly violence.

The 15-year-old teen was locked up at the Middlesex County Juvenile Detention Center, while Dean and Parker were being held in the Mercer County jail pending detention hearings.

McMillan’s criminal past helped cops identify her as one of the alleged shooters.

Authorities received information that the woman involved in the shooting used to sell pills and would give out juice boxes to her loyal customers, sources told the news outlet.

Investigators learned she was known on the streets as “Mama Dean” and identified her on surveillance footage that captured Monday’s shooting.

Sources with knowledge of the probe told the Trentonian on condition of anonymity that Parker was sucker-punched as he and “Mama Dean” were walked out of the business.

McMillan went to get a handgun and then walked back into the laundromat with guns blazing at the people beating Parker, striking the 16-year-old, the prosecutor’s office said.

Fanfan tried to take cover but was executed at point-blank range by Parker after McMillan handed the gun to him, according to prosecutors.

As the group headed for the exit, the 15-year-old took the gun and walked back toward the counter and shot Fanfan several times while he was sprawled on the ground, prosecutors said.

McMillan, Parker and the 15-year-old boy then jumped into her car and sped off, according to the report.

In 2016, McMillan was nabbed by police after they witnessed a drug deal between her and another man.

A search warrant of her home led to the seizure of a sawed-off shotgun, a handgun, $3,200 in cash and 165 pills, including nine Oxycodone and Xanax, authorities said at the time.

McMillan use to push pills for $20 bucks a pop, giving her buyers juice boxes and chips with each sale, sources told the newspaper.

She was charged with weapons and drugs possession, but they were dismissed after she completed pretrial intervention, according to a prosecutor’s office spokeswoman.

CBS and WarnerMedia will no longer run e-cigarette advertising