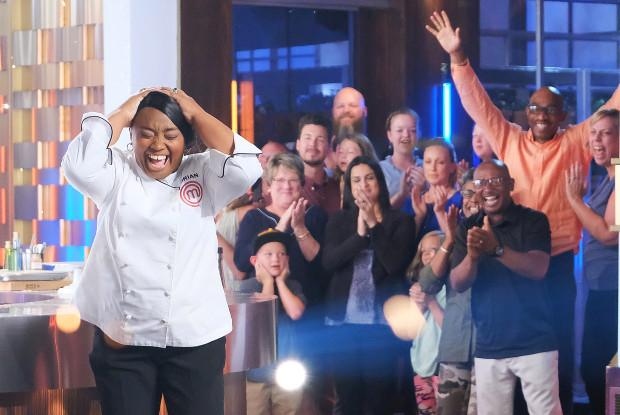 After 10 season MasterChef has a Black Woman as the winner

he Georgia native made history on the show’s 200th episode For the first time in MasterChef history, the winner is a Black woman. Contestant Dorian Hunter was announced as the season 10 winner...
by Raquel Jayson September 22, 2019 315 Views

he Georgia native made history on the show’s 200th episode

For the first time in MasterChef history, the winner is a Black woman.

Contestant Dorian Hunter was announced as the season 10 winner on the show’s season finale last week.

Due to the absence of other Season 10 finalists Sarah Faherty of San Diego and Nick DiGiovanni from Rhode Island, this photo was a dead giveaway to fans that Hunter was indeed the winner.

Hunter is originally from Cartersville, Georgia, a town right outside of Atlanta. Her victory aired on the show’s 200th episode. Along with being crowned as the champion of season 10, she will also intern at restaurants of the three chef judges, Gordon Ramsay, Joe Bastianich and Aaron Sanchez.

Hunter also was very nervous about what foods to pick in the finale, but she said what saved her was listening to her own intuition.

“You have to step out of your comfort zone enough to show your growth, but you also have to show what you know. I can’t be somebody else. I can’t be Sarah and I couldn’t be Nick. Our gifts are very individual,” she told Parade.com.

“Nick is very innovative; Sarah is a plater out of this world. I come in with flavor and technique geared toward the form of cooking that I cook. I didn’t look at what they were cooking. I think that, for me, I showed my growth. That was the most important to me.”

Woman Reports Husband Assaulting, Pouring Gas on Her and Threatening to Set Her on Fire