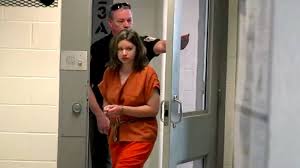 Alexis Wilson was working an afternoon shift at the local Pizza Inn in McAlester, Oklahoma, on Sunday, when she pulled a co-worker aside to boast about her new gun....
by Alycia Pascual-Pena September 18, 2019 628 Views

Alexis Wilson was working an afternoon shift at the local Pizza Inn in McAlester, Oklahoma, on Sunday, when she pulled a co-worker aside to boast about her new gun.

The slight 18-year-old with large brown eyes clutched her iPhone and pressed play on a video of her shooting a newly purchased AK-47, according to an incident report. Then Wilson told the other teenage waitress how much she resented the people at her old school – allegedly adding that she wanted to “shoot 400 people for fun.”

The chilling conversation shook Wilson’s co-worker. She reported it to a manager, who called the McAlester police.

On Monday, the Pittsburg County Sheriff’s Office said Wilson was charged with a felony for making a terrorist threat against McAlester High School.

“In today’s times, you can’t say stuff like that,” Pittsburg County Sheriff Chris Morris told KTUL. “We’re going to take it and investigate it to the fullest extent and make an arrest if possible because we do not want any of our schools getting shot up – nobody does.”

Wilson has pleaded not guilty. Her lawyer did not immediately return a request for comment.

The 5-foot-7, baby-faced teenager is an anomaly as a female suspect allegedly plotting a mass shooting, but police described her as a serious threat.

The high school she allegedly targeted had suspended her once for bringing a knife to school and again for displaying swastikas on her personal belongings, a school resource officer told the sheriff’s office. Her booking photo shows Wilson wearing a T-shirt referencing “The Anarchist Cookbook,” a 1971 book advocating for violent civil disobedience that has been found among the belongings of school shooters. On Facebook, Wilson had liked a documentary about the 1999 Columbine High School massacre.