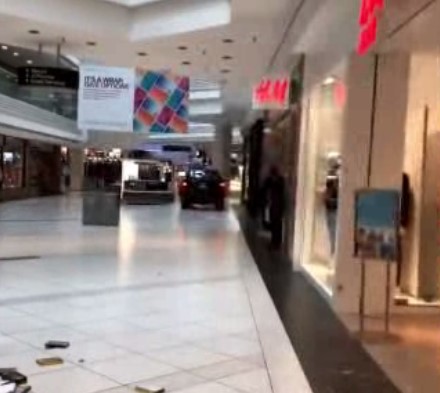 A SUV Just Drove Into A Mall In Chicago!

An SUV smashed into Woodfield Mall and drove down the main hallway, slamming into a kiosk and stores, sending panicked shoppers scrambling for safety on Friday afternoon. A Schaumburg...
by Raquel Jayson September 20, 2019 264 Views

An SUV smashed into Woodfield Mall and drove down the main hallway, slamming into a kiosk and stores, sending panicked shoppers scrambling for safety on Friday afternoon.

A Schaumburg police official says no shots were fired. The driver is in custody.

There is video on social media showing the SUV driving into the mall. The user says, “This is not happening right now!”

A witness, Jason, was ordering ice cream when he saw the car only a few feet away, moving erratically. He told his wife to get into the nearby Starbucks, and he ran to the SUV, which had crashed into a pole. He opened the door and took the keys out of the ignition.

He said the driver was young and appeared “dazed and confused.” At that point, police were able to take the driver into custody.

“He seemed to be trying to get as far as he could,” Jason said.

He and his wife got out of the mall and will be flying out of O’Hare airport to go home.

Lori Halfman was in the Sears store when the car crashed through the door. “It was very scary. I didn’t know what was happening. A worker starting yelling, ‘Everybody evacuate.’”

Another witness said the SUV almost hit a bunch of kids near the Rain Forest Cafe.