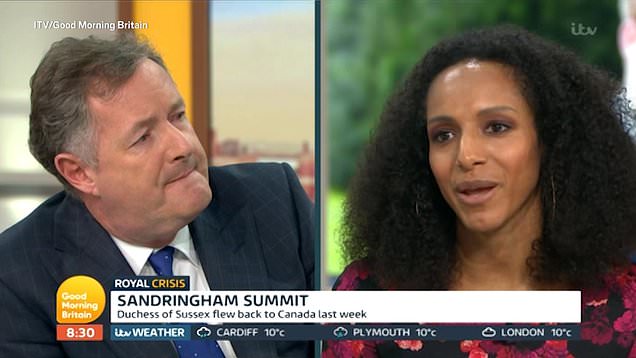 GOOD Morning Britain host Piers Morgan was understandably raging after being branded a “racist” on live TV as he aired his views about Meghan Markle. The blunt ITV breakfast anchor,...
by Raquel Jayson January 13, 2020 579 Views

GOOD Morning Britain host Piers Morgan was understandably raging after being branded a “racist” on live TV as he aired his views about Meghan Markle.

The blunt ITV breakfast anchor, 54, locked horns with guest Afua Hirsch on Monday as she claimed the “narratives” he was citing were “racist.”

The debate came about after Piers branded mum of one Meghan and husband Prince Harry as “spoiled brats” who were holding the monarchy to ransom.

The couple recently said they wanted to become financially independent after dropping the bombshell news of the Royal resignation via Instagram.

While the Duchess of Sussex has fled the UK for Canada, the Duke has been left to pick up the pieces and will be locked in crunch talks with the Queen at Sandringham today.

Piers raged after Afua took issue about “surreal” discussions over Meghan’s “exotic” African-American heritage, and demanded to know the reasoning behind her views.

Piers, who has previously showed scorn over Meghan’s conduct while part of the royal family, said of Meghan: “She was the first mixed race person to enter the royal family.

“Why do you take exception to the word exotic?”

He continued: “You can’t just say these things are racist when they are not.”

Afua claimed the phrase “othered” Meghan and “associates her with a history that has posited people of African heritage as other.”

Yet the response was not enough for Piers who pushed the debate further and claimed: “You see racism in everything.

“Are you accusing me of being racist? Are you …”

Afua replied: “Yes … I’m saying that the narratives that you’re perpetuating are racist.”

After the shocking slur against his character he continued to press: “Yes? Where have I been racist?

“Name one example of me being racist – you are saying this but you have to prove it – where am I being racist?”

The debate then turned to that of the British Empire, and Piers’ views on that.

Many Angry At This Dad For teaching His Four Young Kids – All Aged Under Seven – How To Kill: Hunting