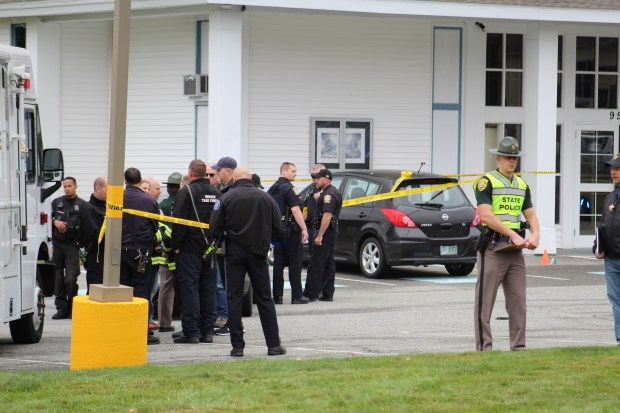 A man shot the presiding bishop and the bride at a church wedding here Saturday morning before being pinned down by attendees and arrested by police, state officials said....
by Zach Freeman October 13, 2019 414 Views

A man shot the presiding bishop and the bride at a church wedding here Saturday morning before being pinned down by attendees and arrested by police, state officials said.

A gunman entered the New England Pentecostal Ministries church at approximately 10:12 a.m., according to the Pelham Police Department. Authorities say guests had subdued the attacker by the time law enforcement arrived to find Bishop Stanley Choate with wounds to his upper chest.

Dale Holloway, 37, has been charged with first-degree assault on 75-year-old Choate, New Hampshire Attorney General Gordon J. MacDonald announced in a statement Saturday evening. There were no fatalities, but Choate is in serious condition at Tufts Medical Center in nearby Boston, according to MacDonald’s statement.

The shooting, carried out with a handgun, does not seem to be random, Pelham Police Chief Joseph Roark said at a news conference Saturday. No motive has been announced, but officials are investigating potential links to another tragedy that struck the church earlier this month, when one of its ordained ministers, Luis Garcia, was found shot to death inside his home. Saturday’s events rattled community members who arrived at the church to attend Garcia’s funeral — only to be turned away by authorities in the aftermath of more gun violence, local news outlets reported.

Holloway is Garcia’s stepson, Senior Assistant Attorney General Benjamin Agati confirmed to The Washington Post. Brandon Castiglione, the 24-year-old charged in Garcia’s death, is the son of the groom in Saturday’s ceremony. The groom, 60-year-old Mark Castiglione, was also injured after being struck in the head with an unidentified object, according to Agati.

Bride Claire McMullen, also 60, was shot in the arm and is in “good condition,” according to the attorney general’s statement. The groom has been released from the hospital.

There “may be some elements of revenge” to the latest shooting, Agati said. He emphasized that investigators are pursuing many avenues and that a connection between Garcia’s death and Saturday’s events remains unclear.

Holloway, of Manchester, N.H., has also been arrested on “alternative counts of purposely and knowingly causing bodily injury by means of a deadly weapon” related to the shooting of the bishop, according to the attorney general. He is set to appear Oct. 15 in Hillsborough County Superior Court in Nashua, N.H. It is not clear whether he has a lawyer.AD

Agati said officials hope to have a clearer picture of the motive by the arraignment.Police seen outside New Hampshire churchA man at a church in Pelham, N.H., on Oct. 12 said when he arrived for a celebration of his friend’s life, police told him, “Everything has been canceled.” (NBC Boston)

“A coward walked into my family’s church today,” Neivia Choate, who identified herself as the bishop’s niece, wrote in a Facebook post. She asked people to “get on your knees and pray for my family.”

Other community members were reeling Saturday after the violence, too.

Sen. Maggie Hassan (D-N.H.) said in a tweet that she was “deeply disturbed” to hear of the attack.

“Today was supposed to serve as a celebration of the life of Minister Luis Garcia,” she wrote, adding, “This senseless violence can’t continue.”AD

I’m deeply disturbed to hear about the shooting in Pelham this morning. Today was supposed to serve as a celebration of the life of Minister Luis Garcia. This senseless violence can’t continue — my prayers are with the victims of this terrible attack.https://www.wmur.com/article/pelham-new-hampshire-church-incident/29447808# …Authorities respond to active police situation at Pelham church, chief saysAuthorities responded to an “active police situation” in Pelham on Saturday morning, according to the police chief.wmur.com5110:27 AM – Oct 12, 2019Twitter Ads info and privacy41 people are talking about this

A Domestic Abuse Month event was also scheduled for 9:30 a.m. Saturday, according to the church’s calendar.

About 40 people were at the wedding, police estimated, and some of them received treatment for minor injuries incurred in the struggle with the shooter. They “basically gang-tackled” the gunman, Roark said.

“That is a standard that’s being taught now … to address the threat,” he said.

Police provided the church with active-shooter training within the past year, he added.

The New Hampshire State Police’s major crime unit responded to the scene, and the church remained surrounded by emergency personnel Saturday while police closed nearby roads.

Authorities hope to finish their on-site work by tomorrow, state officials said. Sunday services at the Pelham church have been canceled.