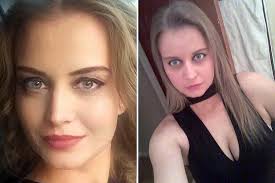 A husband who faked his wife’s suicide is facing life in jail – after he boasted to a blonde in a pub ‘I strangled her’. Derek Potter, 64, tried to cover up the killing by pretending his wife Lesley hanged herself at their home. A court heard police did not at first treat Mrs Potters’ death as suspicious – and her body was released to a funeral director. Derek Potter, 64, confessed to his fellow builder Natalia Mikhailoea-Kisselevskaia, 32, that he had killed his wife (Picture: Wales News Service) But roofer Potter confessed to the killing to a woman in his local pub just one week before Mrs Potter, 66, was due to be cremated. He told fellow builder Natalia Mikhailoea-Kisselevskaia, 32, what he had done before asking her to move in with him.

‘I thought: “Oh my god, he’s done it”.’ The court heard the death was reinvestigated after she tipped off police. Prosecutor Elwen Evans QC said: ‘As a direct result of her report of the confession, police started a full investigation of the death.’ ‘Mr Potter killed his wife by strangling her, using his hands. ‘He then tried to cover up what he had done by pretending she had suspended herself with a ligature. The George Pub was the scene of the confession (Picture: Wales News Service) ‘He almost got away with that pretence.’ Mrs Potter’s body was found at her home in Mumbles, Swansea, South Wales, on April 7. A post mortem examination revealed Mrs Potter had a number of injuries including internal injuries, bruising and ‘other marks’ on her body.

Pathologists could also determine a difference in signs of ‘manual strangulation’ and hanging. Ms Evans said there was ‘clear evidence’ Potter made no attempt to resuscitate his wife. Man taken to hospital in serious condition after stabbing in Hackney In his defence, Potter tried to claim Miss Mikhailoea-Kisselevskaia misunderstood what he said when he spoke of strangling his wife. He claimed he was really talking about sex with his wife. He said: ‘I said I had nearly killed her six years ago, and that is why I stopped drinking, and she misunderstood me.

‘I’ve had a great sex life, I’ve been married four times. I’ve had a crazy sex life in my time.’ But he denied to police that she died during a sex game. He told them: ‘This was suicide.’ Potter, of Mumbles, near Swansea, denied murder but a jury took just one hour and 11 minutes to find him guilty. He will be sentence on Thursday morning at Swansea Crown Court.