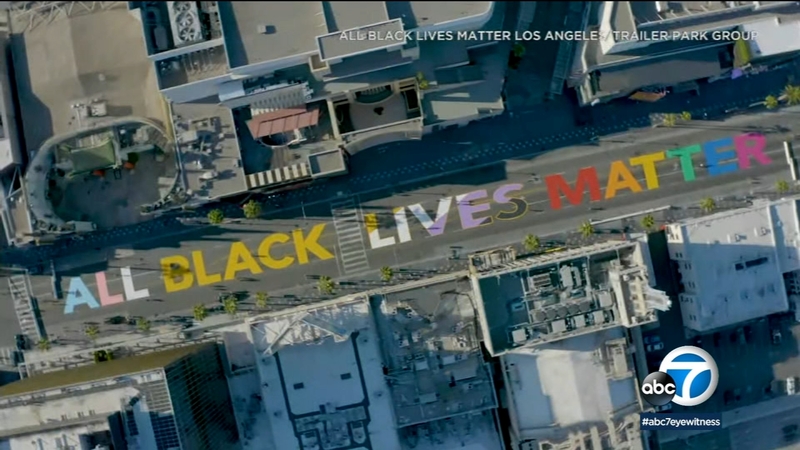 Large crowds are expected to descend onto the streets of Hollywood for the “All Black Lives Matter” protest march Sunday morning. Leaders of various black LGBTQ rights groups have...
by Zach Freeman June 14, 2020 1472 Views

Large crowds are expected to descend onto the streets of Hollywood for the “All Black Lives Matter” protest march Sunday morning.

Leaders of various black LGBTQ rights groups have organized the event, set to begin at 11 a.m. at the intersection of Hollywood Boulevard and Vine Street and continue into West Hollywood on Santa Monica Boulevard.

The march will honor Tony McDade, a black transgender man who was shot by a Tallahassee police officer last week. Protesters will decry the deaths of George Floyd, Breonna Taylor and Ahmaud Arbery, and speak out against the Los Angeles Police Department.

Ahead of the march, the words “All Black Lives Matter” were painted along Hollywood Boulevard in front of the Dolby Theatre Saturday.

Christopher Street West, the organization that produces L.A. Pride, was set to plan a solidarity march at the same time but announced it will no longer be involved after facing backlash for seeking a police permit to hold the event and for not reaching out to Black Lives Matter leadership before announcing the march.

The group planning Sunday’s event is Black LGBTQIA Advisory Board Council, a newly-formed board made up of black LGBTQ+ leaders.

“The protest is in direct response to racial injustice, systemic racism, and all forms of oppression,” the council said on its website, calling for the defunding of police and the prosecution of officers involved in police shootings of people of color.

Ahead of the protest, the organizers urged participants to wear face coverings as the coronavirus continues to spread in Los Angeles County.

“We recognize the safety concerns around COVID-19 and the pandemic currently plaguing the nation, and disproportionately the Black and LGBTQ+ communities, and ask protesters to take protective measures, including wearing face coverings and avoiding large crowds if you are at high risk or displaying symptoms of COVID-19,” the Black LGBTQIA Advisory Board Council said online.