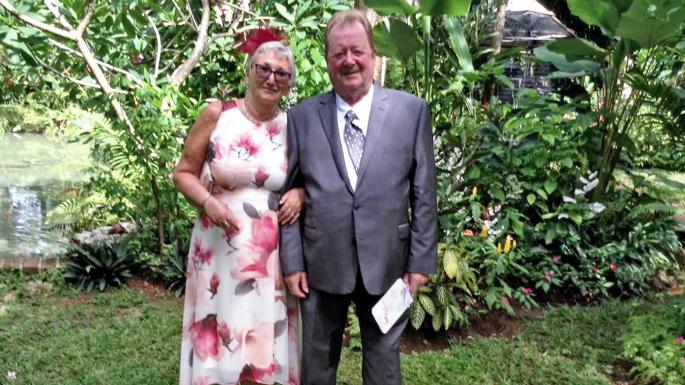 A 71 And 72 Year Old Husband And Wife Found Guilty Of Smuggling Cocaine On A Cruise Ship!

A gran who smuggled $1 million of cocaine on a cruise ship fears she has been given a “death sentence” after finding a lump on her breast. Susan Clarke,...
by Zach Freeman February 23, 2020 153 Views

A gran who smuggled $1 million of cocaine on a cruise ship fears she has been given a “death sentence” after finding a lump on her breast.

Susan Clarke, 71, from Kent, is serving eight years in a maximum-security jail in Portugal following her conviction last September.

Her husband Roger, 72, is also serving the same term in another jail in Lisbon.

Both claim they were duped into carrying the drugs by criminals despite being previously jailed in Norway in 2010 for smuggling large quantities of cannabis.

Susan, who has lost nearly three stone since being locked up, fears she will leave prison “in a box” believing she has breast cancer.

The pensioner currently shares a 10ft by 10ft cell with three other criminals in Lisbon’s women’s jail EP Tires.

She is awaiting the results of a double biopsy on her left breast and fears the worst since having her appeal against her conviction quashed earlier this month.

Susan told The Sunday People: “I may never get out of here alive and there’s no way I can reduce my sentence now.

“We were made an example of but I’ve been handed a death sentence.

“My worry is that I’ll never be free and I’ll be leaving here in a box.”

The gran-of-eight said the worst part of her sentence is being apart from her husband.

She claims Roger’s health is even worse after he was rushed to hospital to have an ulcer removed from his bowel.

Her husband, who is also having tests on his kidneys, has lost seven stone in prison, Susan claims.

She slammed UK authorities for not helping her and Roger, saying: “We feel completely abandoned.

“The Foreign Office has ignored us, Boris Johnson has not helped and we have been completely cut adrift.”

Susan said she was “devastated and angry” after losing her appeal.

They had been in the middle of a dream £6,800 Caribbean cruise in 2018 when Portuguese officials were tipped off by UK cops.

Retired chef Roger told a trial in Lisbon he had no idea the large quantity of drugs were in the couple’s suitcases and claimed he was taking them back to the UK for a friend called ‘Lee’.

Clarke told the court ‘Lee’ was a UK-based Jamaican businessman who worked with an associate called ‘Dee,’ who he named in court as George Wilmot.

The couple also served a jail sentence in Norway after being convicted in 2010 for trafficking 240 kilos of cannabis resin.

Roger said he got into drugs-running to clear debts and was made to do more with his wife as cover after being threatened with violence by gangster paymasters if he stopped.

He was jailed for nearly five years in Norway while Susan was banged up for a year less.

They returned to the UK and changed their names before relocating to Spain’s Costa Blanca.

Ex-secretary Sue, who has one great grandchild, said she only knew her husband’s business associates socially and never accompanied him when he negotiated “fruit sales”.

Roger claims he believed he was carrying exotic fruit which could be sold at Harrods.

Prosecutors said the cocaine was intended to be sold in the UK.

They claim the Brit couple were drug mules who used four cruises in two years to smuggle narcotics for £26,500 a time.

Upon hearing his sentence, ex-chef Roger whispered to his wife in court: “Jesus Christ, I wasn’t expecting more than four.”