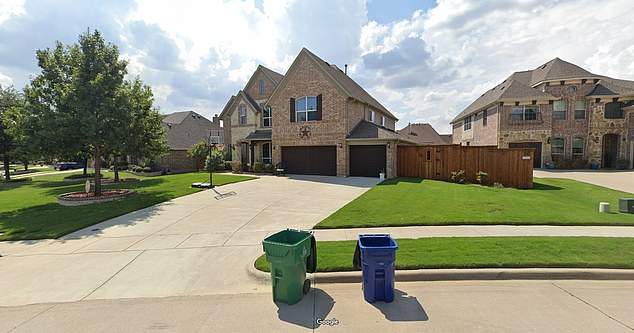 15-year-old boy from McKinney, Texas, has been arrested and charged with murder in the beating death of his mother, police said on Sunday. According to a press release from the McKinney Police Department, the attack was caught on surveillance video installed in the residence.

The teen’s father called the police department to their home in the 700 block of Donelson Dr. in McKinney shortly after 1 a.m. on January 3, authorities said in the press release. Stacy Ellen Barney, 50, was found dead in the home. “The teen was found in the area following a search,” police said. The 15-year-old has been charged with murder after investigators said “home surveillance showed him beating his mother to death inside the family home.

Many Details About the Investigation Have Not Been Made Public

Google Street ViewThe Barney residence where 50-year-old Stacy Ellen Barney was beaten to death by her son, according to police.

Because the teen is a juvenile, his name has not been made public. Details about Barney’s death have not been shared by authorities, including a possible motive or what sparked the attack. Police stated that “this is an ongoing investigation.” McKinney Police Department’s statement continued, “Our hearts go out to the victim’s family during this extremely difficult time.”

The McKinney Police Department confirmed to Heavy that the investigation is “active and ongoing” but no further information is available at this time.

According to Fox 4 KDFW, many neighbors knew the family and the children who lived at the home but no one was willing to go on camera and speak about the tragic events. The outlet also reported that the teenager’s father who called 911 was not harmed in the incident. McKinney is located in Texas just north of Dallas.

In December 2020, Christopher McKinney was accused of stabbing his mother and stepfather after they asked him to stop playing video games in their bedroom while they were trying to sleep, the Detroit Free Press reported at the time. McKinney’s stepfather died of his injuries several days later and the 29-year-old was charged with homicide and assault with intent to murder.

According to Madison Heights Police Chief Corey Haines, “He punched [his] mom in her face breaking her nose. [He] punched [his] stepdad several times, [so his] stepdad went and retrieved a knife from the kitchen to defend himself and his wife. [McKinney] somehow got the knife away from him and then stabbed his mother and stepdad,” Click on Detroit reported.

McKinney resisted arrest and assaulted a fire lieutenant who was administering first aid at the scene, according to the outlet.