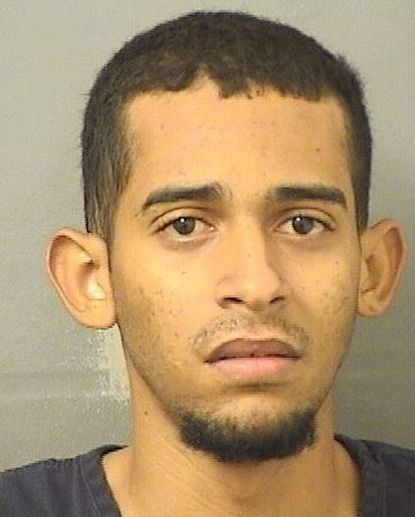 Authorities say a 75-year-old woman has died after being beaten and set on fire by an appliance delivery man. Boca Raton police released this photo of Jorge Luis Dupre...
by Raquel Jayson August 21, 2019 561 Views

Authorities say a 75-year-old woman has died after being beaten and set on fire by an appliance delivery man.

Boca Raton police posted on social media Tuesday that the woman had succumbed to her injuries from a day earlier.

Police say 21-year-old Jorge Luis Dupre Lachazo and another man delivered a washer and dryer to her home Monday.

After installing the appliances, the other man went outside and reported hearing screams minutes later. He found the victim on the floor and called 911.

Police say Dupre Lachazo drove off in the delivery truck but was stopped by a responding officer.

Evelyn “Evy” Udell was home alone, expecting her new washer and dryer to be delivered and installed.

The delivery crew pulled up about 9 a.m. Monday and slid open the door on their truck.

Udell, a 75-year-old Boca Raton woman, was found unconscious in her laundry room, leaning against the washing machine, her head bloodied, her clothes aflame. The dryer was running and all of the burners on the stove — and the oven — had been turned on.

Police say a delivery man, Jorge Luis Dupre Lachazo, 21, of Hialeah, killed Udell in a savage attack — hitting her on the head with a wooden mallet and setting her on fire with acetone.

Udell endured severe head trauma, bleeding in her brain and second- and third-degree burns. She was hospitalized in grave condition until she died Tuesday, eight days before her 76th birthday.

The murder in a quiet neighborhood of a prosperous city was as curious as it was vicious. What would possess a delivery driver to so violently attack a customer? And why would he set her on fire?

Police would not say what triggered Lachazo. The motive is under investigation, they said.

“It would only be guessing on my part,” said police spokesman Mark Economou. “We don’t want to speculate until we have a true motive.”

Udell had worked nearly 15 years at Florida Atlantic University, where she was a cataloger in the library’s technical services department. The university described her as “a kind, caring and hard-working member of the staff.” She left FAU in April 2018

Records show Lachazo had worked for JB Home Delivery, delivering appliances for Best Buy, for a year and eight months.

He and truck driver David Gonzalez arrived Monday at Udell’s home in the Colonnades at Glen Oaks, a suburban neighborhood of $700,000 homes near Yamato and Jog roads.

According to an arrest report, Gonzalez and Lachazo had just removed the old washer and dryer and installed the new appliances in the laundry room near the two-car garage.

Gonzalez, 48, went back to his truck to return several missed calls from the office. Lachazo remained inside the home, supposedly to show the woman how to use the new appliances.

Then Gonzalez heard screams. He watched the garage door close and entered the house through the front door. He found Udell on the blood-stained floor near the laundry room and bathroom, the police report said.

Lachazo was the only other person in the house, and he was acting strangely, Gonzalez told police. As Gonzalez went outside to call 911, Lachazo jumped into the truck and took off, detectives said.

Police stopped the white box truck in the 7100 block of West Glades Road, about three miles from Udell’s home. Lachazo was sweating and shaking. He wore short pants, and the hair on his lower legs was burned. He was taken to Boca Raton Regional Hospital for treatment.

When investigators searched the house they found blood on the tile floor of the laundry room and burn marks on the washing machine and walls. Charred debris and clothing lay on the floor, and a strong chemical odor hung in the air.

A bloody wooden mallet sat on the washing machine; a glass wine bottle with blood and hair lay on the floor. A pair of broken prescription glasses had fallen between the washer and dryer, police said.

In the kitchen, a can of acetone was found near the stove, which had been pulled away from the wall. Investigators later determined that the can bore Lachazo’s fingerprints.

During questioning by police, Lachazo admitted to knocking the woman unconscious by hitting her on the left side of her head with the mallet, a report said. Then he closed the garage door, got the acetone from the garage and spread the chemical around the laundry room. He said he didn’t know how it ignited, police said.

Lachazo admitted to recently using marijuana through a vape and cocaine, police said, but investigators did not say whether that contributed to the crime.

Before Udell died, Best Buy CEO Corie Barry issued a statement saying the company had suspended its relationship with JB Home Delivery and is working with police. The company closed its Boca Raton store on Tuesday out of respect for Udell’s family

“We are profoundly sorry and offer our deepest sympathies to our customer and her family,” Barry wrote.

FAU released a statement saying, “The University is devastated to hear about Evelyn’s passing. We send our deepest condolences to her family, friends and former colleagues.”

Lachazo is charged with murder, aggravated battery on a person 65 or older, and arson causing great bodily harm. He is being held without bond at the Palm Beach County Jail. County records show his next hearing is in September.

Suspicious Deaths of 2 Children; Mother Hospitalized And Neighbors Say Perfect Family No Suspect As Of Now