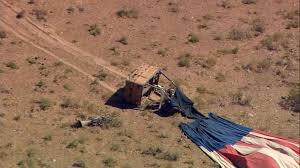 Nevada hot air balloon crash KTNV What was meant to be a magical ride above the Nevada desert on Thursday morning turned into a terrifying accident. Nine people aboard a...
by Alycia Pascual-Pena September 13, 2019 231 Views

What was meant to be a magical ride above the Nevada desert on Thursday morning turned into a terrifying accident.

According to Dean, two people were tossed from the basket in the landing crash, including the pilot, KTNV reported, and the basket reportedly dragged for half a mile before it finally came to a stop.

“We believe that the hot air balloon had come in to make a landing,” Dean told KVVU, saying that the balloon was “not very high” off the ground when two people were thrown from the basket when it tipped over.

Las Vegas police and the Clark Country Fire Department did not immediately respond to PEOPLE’s request for comment.

Seven people were taken to the University Medical Center in Las Vegas to be treated for injuries, CNN reported, with one taken by helicopter and the rest taken by ground transportation.

While one woman reportedly suffered serious injuries, she is expected to survive, according to KVVU.

The cause of the crash is currently unknown, but the FAA is investigating, KTNV reported.

According to KVVU, Vegas Hot Air Sin City Balloon Rides was the company behind the balloon ride, but the company did not immediately respond to PEOPLE’s request for comment.