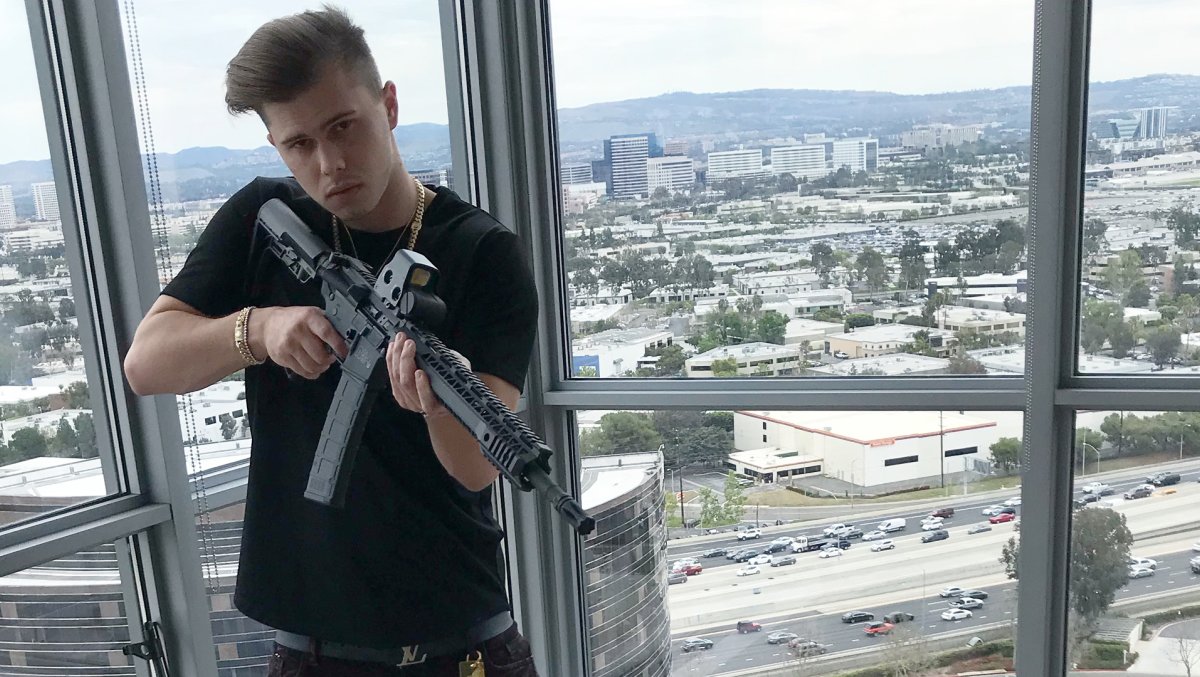 A 22-year-old Santa Ana man was sentenced Monday to more than 17 years in prison for selling fake oxycodone pills laced with fentanyl and other synthetic opioids, according to...
by Joy Smith August 27, 2019 457 Views

A 22-year-old Santa Ana man was sentenced Monday to more than 17 years in prison for selling fake oxycodone pills laced with fentanyl and other synthetic opioids, according to federal prosecutors.Wyatt Pasek, 22, is seen in a photo released by the U.S. Department of Justice on Aug. 26, 2019.

Wyatt Pasek went by the name “Oxygod” when looking for customers online, where he would use social media to post photos and videos of himself under the moniker Yung10x, according to a news release from the U.S. Department of Justice.

Pasek admitted to selling pharmaceutical pills that were designed to look like brand-name oxycodone and pleaded guilty last November to a series of criminal charges — including participating in a narcotics-trafficking conspiracy, being a convicted felon in possession of a firearm and money laundering.

He received a sentence of 210 months in federal prison, which is about 17 and a half years.

He and two co-defendants would buy fentanyl and a similar drug called cyclopropyl fentanyl online from Chinese suppliers, using a pill press and other equipment and chemicals to manufacture counterfeit pharmaceuticals and sell them on the darknet, federal prosecutors said.

The black-market drugs would then be sent in the mail or sometimes sold in hand-to-hand transactions, according to prosecutors. 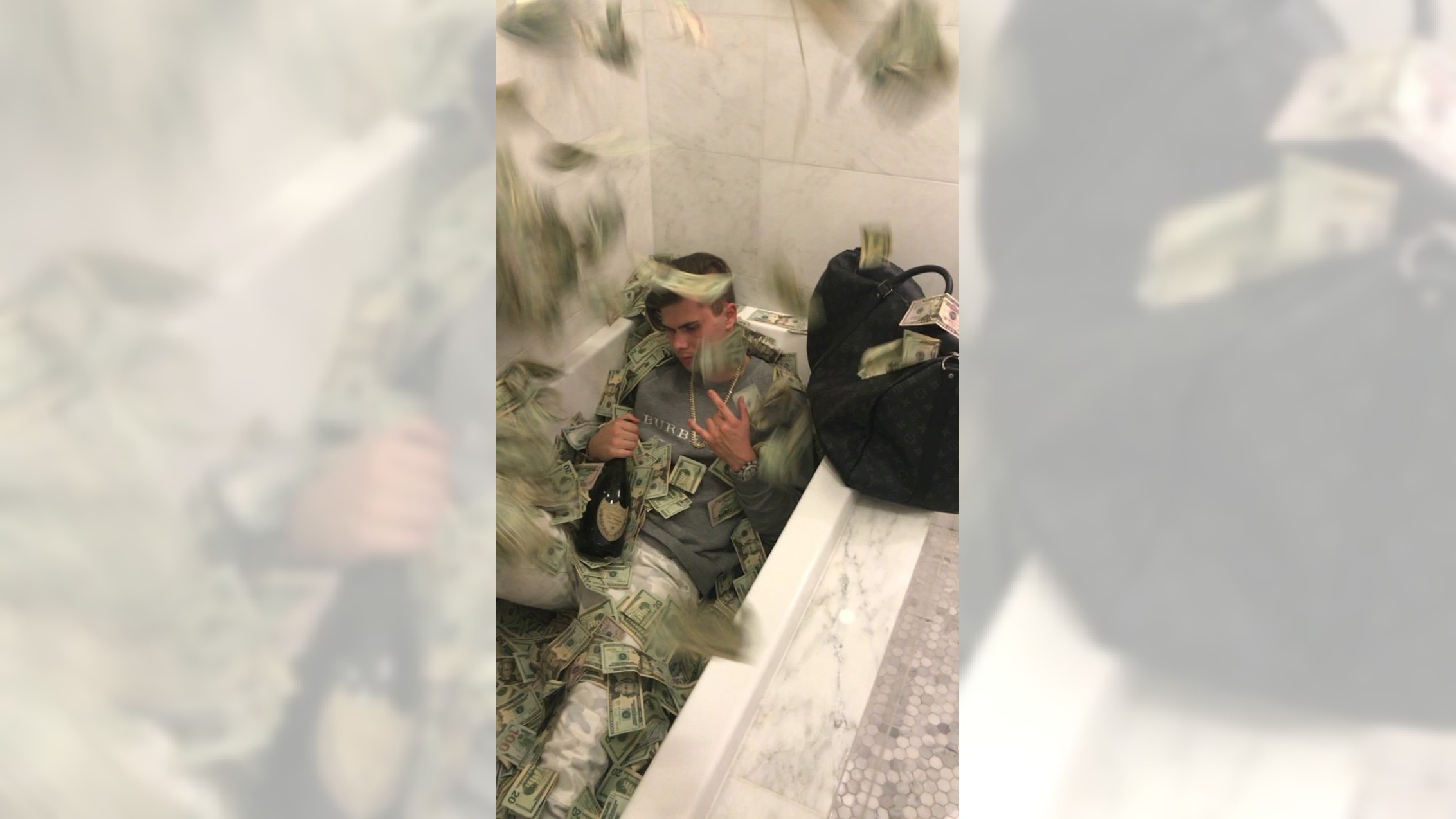 Sitting a tub filled with bills of money, 22-year-old Wyatt Pasekis appears in an undated photo released by the U.S. Department of Justice on Aug. 26, 2019.

The Newport Beach apartment operated as a “clandestine laboratory,” according to prosecutors, where pill presses, small scales, bags, binding agents and dyes were stored along with drugs not yet sold. Suarez and fellow co-defendant Duc Cao, 22, would press the pills there.

The counterfeit oxycodone pills were stamped with “A215” and are round and blue, making them look identical to the brand-name opioids, according to the criminal complaint. But Pasek and his co-conspirators would also make and sell fake Xanax pills.

Those pills were made with the stamp “GG249” and were oblong and white to mimic the appearance of actual brand-name Xanax, the complaint states.

Analogues of fentanyl such as cyclopropyl fentanyl, methoxyacetyl fentanyl and carfentanil were also used to manufacture counterfeit opioids, according to prosecutors.

Such potent substances were especially dangerous for consumers since they were being made to appear like much less powerful drugs, U.S. Attorney Nick Hanna said in a news release from his office.

“The use of powerful drugs such as fentanyl in counterfeit pills intentionally made to look like less-lethal opioids demonstrates a complete disrespect for human life,” Hanna said.

Pasek lived in the penthouse of a luxury apartment building in Santa Ana until his arrest in April 2018. His Instagram page is filled with photos of him posed alongside luxury sports cars and holding wads of cash.

His two co-defendants were taken into custody around the same time, and authorities raided the Newport Beach apartment, where prosecutors said they discovered nearly 100,000 counterfeit oxycodone pills packed into bags, bundles of cash, hundreds of fake Xanax pills and nearly six kilograms — or just over 13 pounds — of fentanyl and fentanyl analogues.

Posing outside a luxury car, Wyatt Pasek, 22, handles a wad of cash in this photo released by the U.S. Department of Justice on Aug. 26, 2019.

Federal authorities said 20 packages were intercepted before they could be sent to Pasek’s customers in more than a dozen U.S. states.

As part of a plea agreement, prosecutors said, Pasek has agreed to forfeit more than $21,000 in cash, pieces of jewelry including a Silver Royal Offshore watch with diamonds and a gold and diamond Bitcoin necklace as well as two gold bars that were seized from his mother’s home. He has also given up thousands of dollars in cryptocurrency and Bitcoin.

“I know I have affected countless [people],” he said during Monday’s sentencing hearing, according to the U.S. Attorney’s Office. “I can’t even imagine how much damage I have done.”