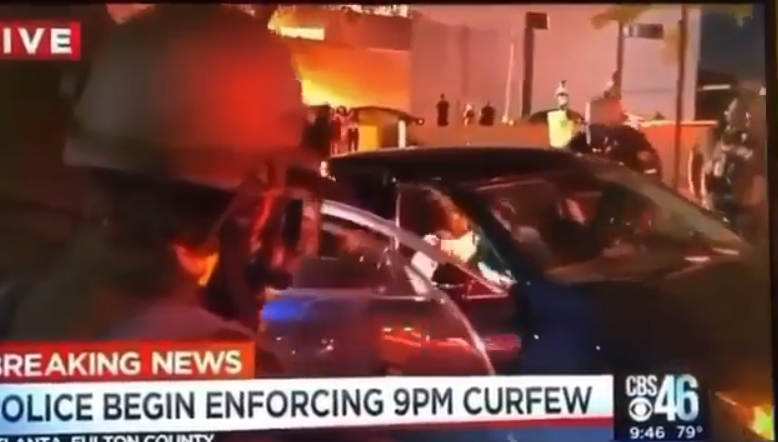 May 30, 2020 – Atlanta – Atlanta Mayor Keisha Lance Bottoms announced a 9pm curfew as protests continued for a second day. Protests over the death of George Floyd...
by Raquel Jayson May 31, 2020 175 Views

May 30, 2020 – Atlanta – Atlanta Mayor Keisha Lance Bottoms announced a 9pm curfew as protests continued for a second day. Protests over the death of George Floyd in Minneapolis police custody spread around the United States on Saturday, as his case renewed anger about others involving African Americans, police and race relations. Ben Gray for the Atlanta Journal ConstitutionPhoto: The Atlanta Journal-Constitution

“Some time during the night, I saw very disturbing video of two young college students who were in downtown Atlanta yesterday evening. The use of force is never acceptable,” Bottoms said.

The Spelman student was riding with a young man the college identified as a former Morehouse College student near downtown Atlanta when they were ordered out the vehicle.

“A police officer then opened the door, tased her and pushed her on the ground,” Spelman College President Mary Schmidt Campbell said in a statement. “She was taken into custody. Her crime? Nothing. She was not charged and, after several hours in custody, was released.”

“The nation’s underlying turmoil is having the iron curtain pulled away from its hidden defects of economic, healthcare and judicial system disparities, all fueled by the pigmentation of one’s skin,” Bowers, who knows Pilgrom and Young, said in a statement he shared on social media.

Young is part of this year’s graduating class from Morehouse, Bowers said.

Bottoms ordered a 9 p.m. curfew that began Saturday to stop the looting and unrest that occurred the night before in downtown Atlanta and other parts of the city.

The mayor said she postponed press conference scheduled for 2 p.m. Sunday for four hours so that she and Atlanta police Chief Erika Shields could review body cam footage from the five officers involved.

“After extensive review of that footage, Chief Shields and I made the determination that two of the officers involved in that incident will be terminated immediately,” Bottoms said. “The three other officers are right now on desk duty.”

The two were in the area to observe the demonstrations, when they got stuck in traffic before the curfew, Spelman said.

The college, located near downtown, is part of the Atlanta University Center Consortium, a collective of the city’s historically black colleges and universities. The schools have a long history of being involved in civil rights protests, including Black Lives Matter protests in recent years.

Campbell co-wrote a letter Sunday with the presidents of three of those schools – Clark Atlanta University, Morehouse and Morehouse School of Medicine – demanding an investigation.

“It is clear that the behavior of law enforcement in this country must change,” the letter said. “Incidents like the one last night and the many events of police violence (recorded and unrecorded) leading up to today heighten the urgency of this need for change. And we support our students as champions and activists on behalf of change.”