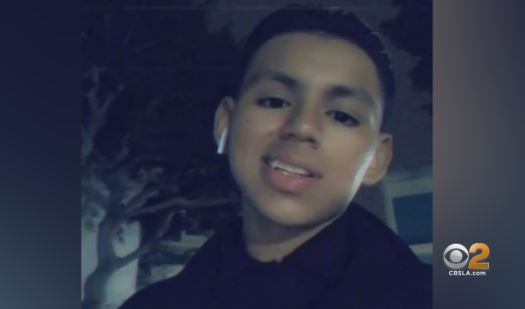 CBSLA reports the victim, identified as 18-year-old Andres Guardado, was shot around 6 p.m. after running away from deputies in the area of 400 Redondo Beach Boulevard in unincorporated Gardena.

In a statement, the Los Angeles County Sheriff’s Department said Guardado’s death is being investigated by homicide detectives.

“The police came up, and they pulled their guns on him and he ran because he was scared, and they shot and killed him,” Andrew Heney, the shop’s owner, told CBSLA.

Officials said deputies from the Compton Sheriff’s Station observed Guardado in the area. That’s when Guardado “looked toward the deputies and produced a firearm, then proceeded to run southbound between two businesses,” according to the statement.

A short foot chase ensued and not long afterward, deputies shot Guardado. He died at the scene.

The owner of the autobody shop told CBSLA that Guardado was working outside to deter a recent string of graffiti incidents.

An undated photo of 18-year-old Andres Guardado, who was shot and killed by L.A. County Sheriff’s deputies on June 18, 2020, in Gardena, Calif. (Family photo)

The shooting happened in the 400 block of Redondo Beach Boulevard, near South Figueroa Street, at about 5:53 p.m., according to the sheriff’s department. Deputies patrolling in the area say they saw a man flash a gun and then run south between two businesses.

Andrew Heney, the owner of the Freeway auto body shop, confirmed to CBSLA that Guardado worked as a private security guard for the shop.

“We had a security guard that was out front, because we had just had certain issues with people tagging and stuff like that,” Heney said. “And then the police came up, and they pulled their guns on him and he ran because he was scared, and they shot and killed him. He’s got a clean background and everything. There’s no reason.”

Deputies gave chase, and after a short foot pursuit, Guardado was shot by deputies in the upper torso, LASD said.

“Deputies observed the individual, at which point he observed the deputies,” an LASD spokesperson said Thursday night. “The individual then produced a handgun, and then began running southbound away from the deputies through businesses nearby. Deputies engaged in a short foot pursuit between the two businesses, at some point the deputies contacted the suspect and that’s when the deputy-involved shooting occurred.”

He died at the scene. A handgun was also recovered, the sheriff’s department said. Its unclear how many deputies opened fire on him.

Family members confronted deputies at the scene Thursday night and told reporters they don’t believe Guardado was armed. Its unclear if he was wearing a uniform.

“I lost a part of me, it’s empty, and I’m never gonna have him back,” his sister told reporters. “I’m never gonna see him, he’s never gonna talk to me, I’m just, I can’t, I just can’t believe this happened to my brother. It really hurts me.”

This is the second fatal shooting involving LASD deputies in the past two days.

On Wednesday, deputies fatally shot Terron Jammal Boone, identified by family as the half-brother of 24-year-old Robert Fuller, a black man who was found hanging from a tree last week in Palmdale.