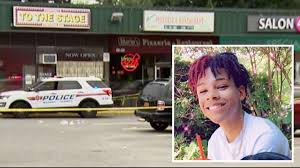 16 Year Old Stabbed and Dies, While Being Recorded On Camera By Friends

Authorities in New York say a 16-year-old boy died Monday after being stabbed during a fight that erupted outside a strip mall — and rather than help the injured teen or call 911, eyewitnesses recorded his death on their phones.

“They videoed his death instead of helping him,” Fitzpatrick said, noting more than 50 teens either witnessed or were involved in Monday’s brawl, which happened in Oceanside after school was dismissed.

“This can’t go on,” Fitzpatrick said. “Your friends are dying while you stand there and video it. That’s egregious.”

Fitzpatrick said Morris was targeted by up to seven teens after walking another boy’s girlfriend to her home.

As the fight unfolded, Morris was stabbed once in the chest, Fitzpatrick said.

Fitzpatrick said he wants other eyewitnesses who may have videotaped the brawl to come forward.

Investigators are reviewing the footage they’ve been able to acquire, and are identifying possible suspects.

“Everyone loved him and he loved everyone,” Keyanna said. “He was amazing.”

Jasmine Ortiz, a parent of an Oceanside High School student, commented to CBS: “These kids, they have no humanity.”

The fight also left another teen with head injuries and a broken arm.

Father Takes Children To Church Before Killing Them